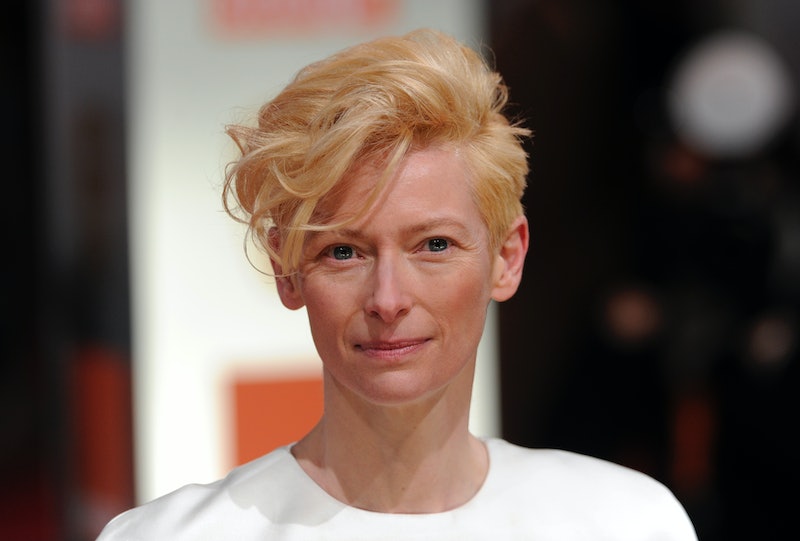 The Marvel Universe just got even more exciting. As if Benedict Cumberbatch as Doctor Strange, the Sorceror Supreme, wasn't exciting enough, Marvel could be adding another member to the cast of their upcoming film that'll overwhelm you with happiness: Tilda Swinton is in talks to join Doctor Strange . According to The Hollywood Reporter, the transformative actress of the silver screen is currently in negotiations to join the movie about the magic-wielding superhero in a surprising key role.

Doctor Strange is the story of Stephen Strange, once a renowned but egotistical neurosurgeon who loses the use of his hands in a car accident. Desperate to regain his maneuverability and, therefore, his career, Strange travels to Tibet. Thinking he's meeting someone who can heal him with ancient medicinal techniques, he instead meets The Ancient One, a powerful sorcerer who awakens his magical abilities and trains him to become Earth's protector against supernatural and extra-dimensional threats. And Swinton is in talks to play The Ancient One.

Swinton has proven herself to be one of the most chameleon-like actors of our age, and the fact that she could be joining this film in a role traditionally depicted by a man means a couple of things. First, Marvel is just as astounded by her transformative abilities. Second, Doctor Strange will be far more unconventional and interesting than we previously thought. Though the deal has not yet been closed, THR notes that Marvel rethought casting a man in this role, and Swinton is an excellent choice.

Swinton is a favorite of Wes Anderson films; she featured in his past two efforts, The Grand Budapest Hotel and Moonrise Kingdom. If Snowpiercer, Constantine, The Chronicles of Narnia and Only Lovers Left Alive are any indication, she also basks in the glory of supernatural roles. In the latter, she starred opposite another Marvel movie favorite, Tom Hiddleston, and we hope this deal closes soon. The thought of seeing her grapple with a self-centered character of Cumberbatch's is too enticing to pass up.

Currently, Cumberbatch is the only one officially cast in Doctor Strange, which is gearing up for a theatrical debut on November 4, 2016. However, Daniel Bruhl, who's playing Baron Zemo in Captain America: Civil War, is rumored to also appear in this solo Marvel movie. Horror director Scott Derrikson is directing the film, which will expand the Marvel Cinematic Universe to incorporate parallel dimensions. We got a taste of the mystic arts when Scarlet Witch came on the scene in Avengers: Age of Ultron, but the Sorcerer Supreme will show us something we've never seen before.