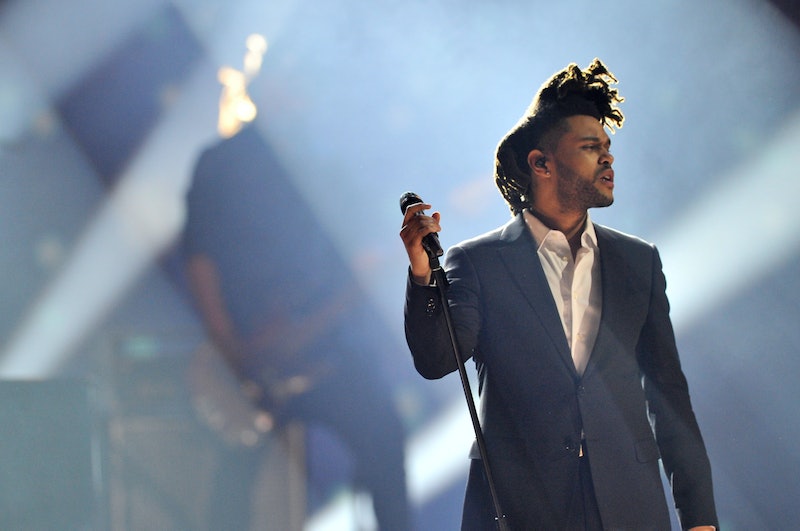 After recording two singles for the Fifty Shades of Grey soundtrack, fans of The Weeknd might be expecting him to stay in the zone of releasing more sexy, seductive songs. I tend to agree with that train of thought, and that’s mostly because his massive hit "Earned It" still resides on my priority playlist where it will remain until a sexier song dethrones it. The good news, though, is that The Weeknd’s new song "The Hills" and its video are equally addictive, even if the tune doesn't exactly give off the hot and bothered vibe we're used to.

But sexiness aside, “The Hills” video itself has its own draw: It’s about as dramatic as the reality show with which it shares its name: I'm talking about the totally unaffiliated The Hills, formerly of MTV. From what I’ve gathered, there’s no known correlation between The Weeknd and Speidi's one-time reality TV home, although stranger connections have happened, so you just never know.

Anyway, the drama is at level 10 throughout the entire video, which is about the closest visual example I can think of to represent what happens when you date an angsty musician. Basically, some crazy stuff goes down and a girl could easily find herself stranded at the scene of a fiery car crash.

Don't believe me? Just watch nine of the most dramatic moments from The Weeknd's "The Hills" video:

Sheesh. This shot of a car flipped over on its hood is merely the beginning of the video. Who knows what this has to do with the titular hills, but let the drama begin.

The Weeknd's Slow Crawl Out of the Wreckage

And the Oscar for best slow, dramatic crawl from a non-moving vehicle in a motion picturesque-music video goes to The Weeknd.

He also limping, grimacing, and brushing dirt off his shoulders. This is already a pretty grim scene, but then the situation gets worse...

More People Emerge From the Crash

So what will The Weeknd do now? Call 911, maybe? Knock on doors for help? Of course not! That would be so not dramatic. So obviously, this is what happens next...

Then He Walks Away

And holy crap is that chick pissed! Can you blame her, though? I know the song goes, "I only call you when it's half past five," but seriously Weeknd?! You crash the car and leave her stranded at the scene without so much as checking to see if she has a broken bone or sprained ankle? Not cool, Weeknd. Not cool.

And, how did I not see that coming? This might be The Weeknd's worst day ever, but he seems completely oblivious. I suppose a mild concussion will do that to you.

When He Walks Into a Strange House

Um, whose house is this? Does he know the homeowners? If so, did he at least called before he arrived? Did he ask them to call 911 about the burning car and those injured ladies he left at the scene of the accident? I have so many questions.

The Lights Go Out

This looks like a scene out of Poltergeist and I'm officially afraid to see what happens next.

These Mysterious Ladies in a Red Room

So that didn't turn out to be as scary as I thought it would. But given the way everything ends, I'm half expecting there to be a sequel. If it's anywhere near as dramatic as this video, I'd be totally into it.

More like this
The 'Kenan & Kel' Reunion On 'SNL' Took A Dramatic Turn, Thanks To Keke Palmer
By Brad Witter
Britney Spears Celebrated Her Birthday With Loving Messages To Jamie Lynn & Her Sons
By Brad Witter
The Britney Spears Disney Princess Musical Is Finally Opening On Broadway
By Jake Viswanath
The Fan Whom Adele Scolded For Using A Filter On Their Selfie Has Something To Say
By Radhika Menon
Get Even More From Bustle — Sign Up For The Newsletter