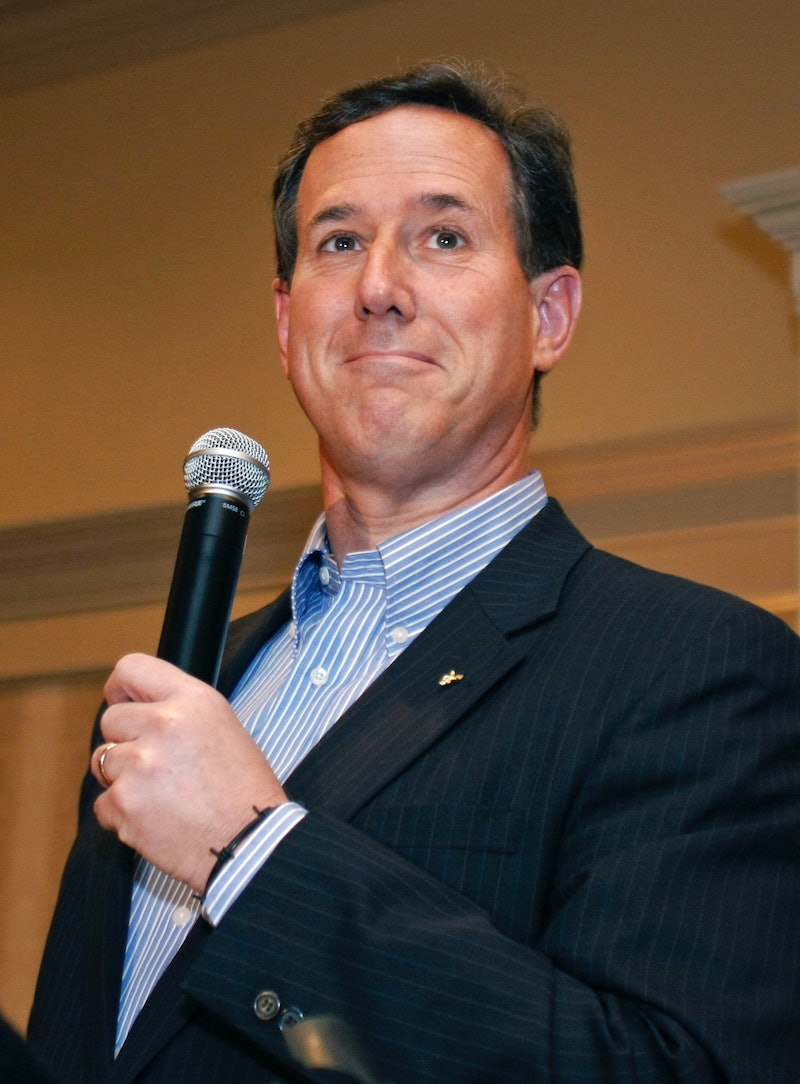 The Republican presidential field is looking to be packed in 2016. With up to 20 Americans widely believed to be considering legitimate candidacies, it's worth taking the time to hash out their respective beliefs. And why not start off with the latest to jump in? Here's a very worthwhile question: what does Rick Santorum think about abortion, and what would that mean in terms of policy?

This might not seem like the hardest one to answer, I admit. Santorum is a former Republican senator from Pennsylvania, a devout Catholic, and he found success as a 2012 presidential candidate with a message primarily appealing to the faith-driven, evangelical corners of the GOP. This isn't the sort of career profile that screams "pro-choice," and if you assumed otherwise you'd be right — Santorum is extremely opposed to abortion in all cases, even for incest and rape victims.

Luckily, this is information that'll be very out in the open in his 2016 campaign, thanks to an interview appearance with CNN's Piers Morgan he did while still campaigning in 2012. As detailed by ThinkProgress, Santorum laid out the full extent of his opposition to abortion, describing a pregnancy resulting from rape as nonetheless a "gift, in a very broken way."

Well, you can make the argument that if she doesn’t have this baby, if she kills her child, that that too could ruin her life. And this is not an easy choice. I understand that. As horrible as the way that that son or daughter ... was created, it still is her child. And whether she has that child or she doesn’t, it will always be her child. And she will always know that. And so to embrace her and to love her and to support her and get her through this very difficult time, I’ve always, you know, I believe and I think the right approach is to accept this horribly created — in the sense of rape — but nevertheless, gift, in a very broken way, the gift of human life, and accept what God has given to you.

In other words, Santorum is literally as opposed to abortion as it is possible to be: he'd like it to be illegal in all circumstances. He's also spoken out against exceptions when a mother's health is endangered by a pregnancy, describing them as a "phony" impediment to a partial-birth abortion ban back in 2011.

In fairness, Santorum did also claim on NBC's Meet The Press in 2012 that he's be open to these types of exceptions existing within abortion bans, as a compromise to "move the ball forward." That's obviously a lot closer to his desired outcome than that of the reproductive health movement, though, so its value as a compromise position is... limited.

And, knowing the extent of his views, it seems simple to see where he'd like the "ball" to end up, given the right circumstances — with a Republican-led Congress while he's sitting in the Oval Office, for example?