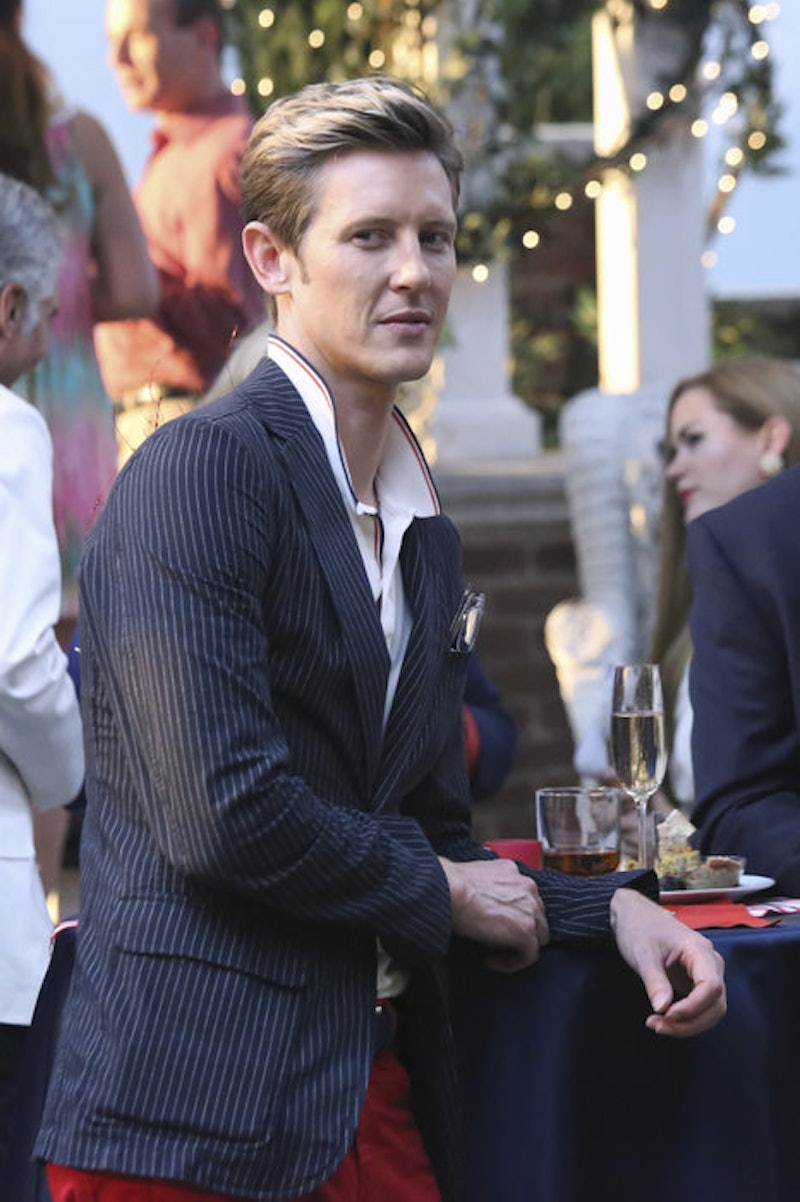 ABC's Revenge finally gave us a storyline to enjoy on Sunday night by way of Emily's BFF, Nolan Ross. Beyond the forceful reintroduction of Daniel's ex, Sarah (who's truly boring compared to everyone else on the show), we got to see Nolan get his hands a little dirty and take revenge on someone who burned him in the past. Ana Ortiz (Ugly Betty) guest starred this week as Bizzy Preston, a PR consultant hired by Conrad to return the Grayson family to its former glory. Unfortunately for Conrad, he has no idea that Bizzy isn't that great of a consultant and she unsuccessfully managed PR for Nolan and Nolcorp in the past.

I've always been a huge fan of Nolan's character (and the actor who plays him, Gabriel Mann) and have been incredibly and unreasonably jealous that Emily gets to have him as a best friend and confidant. Nolan's unique, mostly because he's the only guy on the show who's not "in love" with Emily Thorne, but also because he's constantly underestimated. He's also been unwaveringly loyal — that is, up until recently, when he was the first person to put Emily in her place for being a terrible friend. But his time to shine finally came during this week's episode, and we can only hope that Emily continues to trust him so he can continue to dazzle us.

Sometime in the distant past of Nolcorp, Nolan was apparently an epic playboy. While engaged in a casual and quiet homosexual relationship, Nolan was also engaged in a casual and not-so-quiet relationship with a famous pop star... who happened to be the other guy's sister... who also happened to be married. When the more high-profile story got out, Nolan employed Bizzy to stop the PR nightmare. Her idea of stopping the media firestorm — planting a story that Nolan was gay (which he technically is, but was not publicly at the time), causing a deep and irreparable rift between him and his father. On Sunday night, when the opportunity presented itself for Nolan to seek revenge on Bizzy for ruining his relationship with his late father, he took it and ran with Emily's blessing.

Computer-savvy as ever, even after being out of practice following his post-prison vow to avoid technology, Nolan hacked Bizzy's phone records to find that she's cheating on her high school sweetheart husband. When it came time to drop the iron fist on Bizzy and executing revenge that would make Emily proud, Nolan had a humane moment — rather than destroying her marriage, he saved it. "My revenge plots have a silver lining," he joked later in the episode to Emily when he admitted he wasn't able to go through with life-destruction. We're proud of you Nolan. And, you know what? You should be in charge more often. Here's why:

Three Short Reasons Why Nolan Should Be In Charge More Often

1) He's loyal: Nolan is essentially the only person who can be trusted in the Hamptons, which makes leaving him in charge exceptionally easy. It's also endearing that he's such a protective and good friend that's willing to tell you to cut the shit when you're not reciprocating the good friend juju.

2) He's a super-spy genius: On Sunday night's episode, he was able to hack into Bizzy's phone because he had let her borrow his glasses. The glasses in question had a tiny camera built into them that recorded Bizzy's phone passcode as she typed it in allowing Nolan full access later on. This wasn't the first time Nolan has done something amazing with technology on the show, so I'm not really surprised by his success. But the simplicity in this takedown is beautiful.

3) He knows when enough is enough: Sure, he could've blown up Bizzy's marriage and ruined her relationship just like she did between him and his father. But "an eye for an eye" is not Nolan's style, which is a nice change of pace from Emily's "take no prisoners" attitude. (If it were up to her, the Hamptons would be completely underwater by now.) It was enough to make Bizzy squirm and call off her affair and go home to her husband. Guilt is a strong emotion, and Nolan knows how to use it. Have you been learning from our mothers, Nolan?

Revenge, take note: More Nolan, and less of Emily's relationship problems. Because not even Aiden's accent can keep us interested in that.