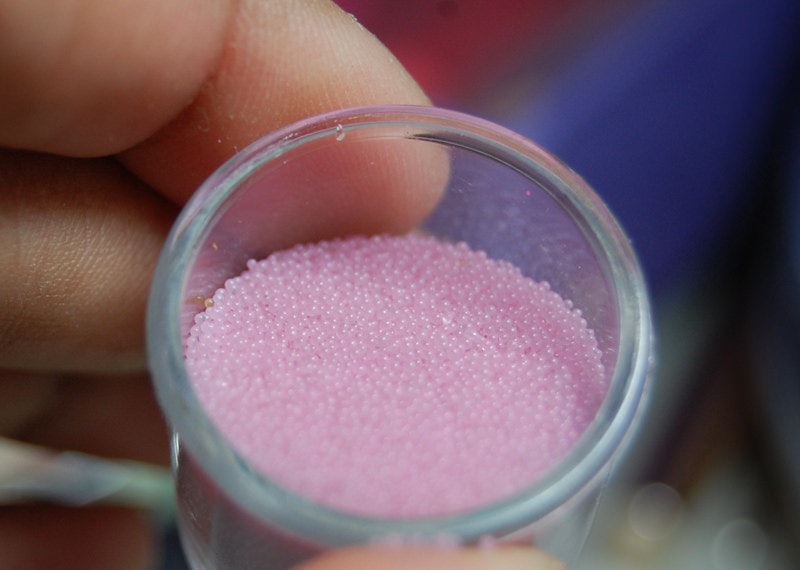 We know certain beauty product ingredients do us, and the environment, no favors: certain plastics, chemicals, and production processes can negatively impact the earth. Now, another state has banned a criminal ingredient in our beauty products. Plastic microbeads have been banned in California, and here's why that's a huge step forward for the environment.

Microbeads — the tiny, round plastic particles in your body or face scrub — are used to help exfoliate and rejuvenate skin. At least, that's what the labels say. The truth is, more often than not, these plastic microscopic spheres aren’t safe and aren’t even proven to actually work.

Plastic microbeads are made from a material called polyethylene, which is the same thing used to make soda bottles and garbage bags. Washing yourself with plastic sounds pretty counterintuitive and somewhat gross, not to mention a senseless waste of resources: alternative exfoliants, like walnut shells and oatmeal, are proven safe and effective.

Even worse, these tiny beads are so small that they're impossible to filter out in our water system. Basically, the microbead soap we wash down the drain is going directly into the ecosystem, including animals we eat, like fish. Plastic in our food chain? No bueno.

According to Allure , anti-microbead researchers dipped nets into Lakes Erie, Huron, and Superior last year and found an average of 43,000 microplastic particles per square kilometer. Environmentalists have been warning against the use of microbeads for years, and it looks like they're right. In response, Illinois, Maine, New Jersey, and Colorado have passed laws restricting the use of microbeads.

What makes California's ban different? This is the first state to ban the use of both synthetic plastic microbeads and the biodegradable alternatives some companies are developing, according to Allure. Similar bans are pending in other states, and the Microbead Free Waters Act of 2015 is making a splash in Congress and with big brands like Johnson & Johnson and Avon.

If you want to shop smarter, here is a list of companies that have taken the #BantheBead pledge to pull microbeads from production. Fingers crossed many other states follow California's footsteps.