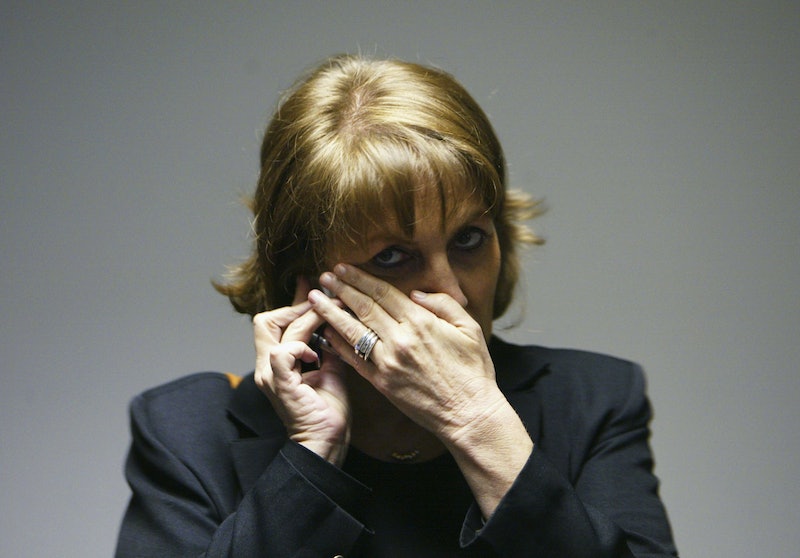 In 2009, a high-profile study claimed to have discovered that 80 percent of all conversations are "gossip" — that is, almost all of our discussions are comprised solely of people gossiping about other people and their lives. But for sociologists, "gossip" doesn't just mean teenagers exchanging revelations about who made out with whom last weekend. In their view, it's a much bigger phenomenon, one that covers every time we share information — either benign or terrible — about people other than ourselves. It doesn't even need to be focused on people we personally know: as the best tabloids and celebrity gossip blogs know, some of the most powerful and quickly-shared gossip in the world involves celebrities that very few people have actually met. Just ask any Kardhasian.

But while the greater category of gossip covers both good and bad news, it's been scientifically proven that hearing gossip about transgressions makes us the happiest. A recent study demonstrated that peoples get a hit of pleasure in their neural reward centers after hearing negative gossip about celebrities. In contrast, they didn't get much of a lift from hearing positive tattle — no matter how much they tried to pretend otherwise. We love celeb screw-ups because they appeal to us on a basic neural level. What's really going on here — and why are scientists arguing about how gossip evolved and why it's so popular?

There are several competing theories about the actual purpose of gossip, — some social scientists believe that gossip is what makes us truly human, while others think it's a weaponized form of interpersonal communication. Here are 5 of the current theories — read them all, then talk amongst yourselves to decide which is the most accurate.

1. It's A Way Of Policing Behavior

Professor Lisa Feldman told NPR in 2011 that gossip is a way of "determining who is friend and who is foe." How do we determine that? Often through moral judgement. Julian Baggini, a philosopher, believes gossip serves a moral purpose, and helps us engage in "judgement of what people are doing and whether it’s right or wrong, good or bad". We're being judge, jury and executioner when we gossip, in other words — and using the information we cull to keep immoral influences at arm's length.

In this sense, gossip serves an evolutionary purpose by keeping us all in line morally. A 2012 experiment at UC Berkeley found that people who witnessed immoral behavior felt better once they'd gossiped about it to people who might have been affected. They were helping to spread the news, and therefore raise the possibility that the person in question would be punished.

Other theorists think that gossip evolved to keep us safe. We ensure our well-being by exchanging information about the world around us (and the potential dangers it contains) with as many people as possible. For early humans out on the savannah, keeping ourselves safe meant knowing as much as possible about our surroundings and situation, and sharing that information as freely and quickly as we could. According to this theory, gossip helped us learn everything important to our survival — from "Family X caught a fish" to "There's a mammoth behind you".

According to Dr. Robert Trivers, gossip is a key social skill, one that helps ensure our healthy integration into human society. A 2011 study found that, rather than causing your downfall beside the water cooler, office gossip could actually win you friends, provided you kept your tongue relatively in check — people who gossiped with just a few close coworkers over the course of a year were found to have stronger friendships with them than those that didn't.

Theorists who believe this theory about gossip call it social "grooming", and argue that it developed along the same lines as bonding activities between primates, like brushing each other's hair and picking off insects. Professor Robin Dunbar found that human brains allow us to maintain a social group of up to 150 people. According to this theory, gossiping with somebody is a way of bringing them closer within this group, checking that they share your views, and bonding over shared positions and judgements. The people you gossip most with, therefore, are the ones with whom you're closest.

Though it may sound similar to theory three, this concept about the uses of gossip is actually the inverse of that point — because it takes into account the fact that gossip can often be damaging as all get out. Spreading rumors about a close friend isn't meant to bring you closer to them, is it? It's you jostling your way to the top of the tree by taking somebody else down — and to that extent, its real function may be to help humans compete to be head of their social hierarchy. Gossip is a serious form of bullying and can be greatly detrimental.

In this theory, gossip is part of what's called "relational aggression" — a blanket term, often used while discussing bullying, that refers to the ways that we compete for power. Gossip is a verbal way of maintaining position, ostracizing outsiders, and showing power. Just as it can help us keep people close, it can also push someone out of a social circle. And having a high status is really important to humans, even if we claim it isn't.

5. It's Part Of Our Urge To Tell Stories

Gossip has another function that is key to social bonding, beyond all those power plays: it's also largely constructed of narratives. Anybody who reads gossip knows that certain traditional arcs and patterns are spread across a celebrity's life — the swift rise, the first fall, the redemption. (We also get very upset with people who buck the pattern and refuse to, say, have a comeback — ahem, Lindsay Lohan). According to this theory, we love gossip because it ties into our human innate fascination with storytelling.

Stories, of course, often have a moral component, so this theory isn't so different from the first — but humans tell stories, according to Brian Boyd, author of On The Evolution Of Stories, for very particular evolutionary reasons. They provide us with patterns of behavior, develop and expand our attention, bond an audience, and let us play. It also, frankly, gives people a leg up on finding a mate: a good storyteller has an edge on a bore.

So there's the real takeaway: being a good gossip makes you sexy as well as social. Got the urge to go read up on Angie and Brad yet?