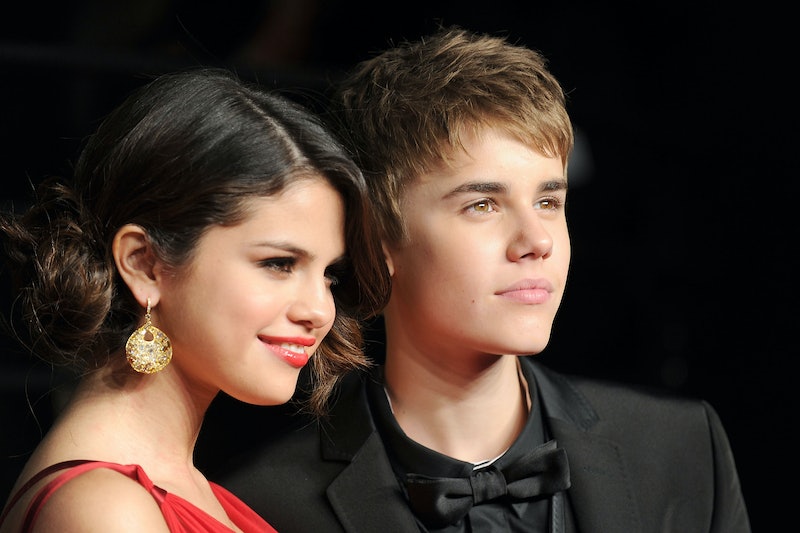 Have you ever laid awake at night worrying about the state of Selena Gomez and Justin Bieber's relationship? No? Yeah, me neither. To say that the pair have had a chaotic relationship would be kind of an understatement, as we spent much of 2014 watching them be happy and then miserable and then happy and then miserable and then together and then apart to the point where anyone left who still sort of liked them together was about ready to pay them to stay away from each other. Then Gomez released "The Heart Wants What It Wants," a song she admitted was about the Biebs, and declared that she was single once and for all — though she would always care for him. Never has that become more obvious than in the Vine video of Gomez and Bieber hanging out that surfaced early Thursday morning, much to the chagrin of fans.

In the video that, according to JustJared Jr, was shared by a preacher named Rich Wilkerson Jr., Gomez is shown grinning at the camera before turning to look at a group of people that she is sitting with — a group that includes Bieber. Many fans are willing to take the video as irrefutable evidence that the couple is back together, despite the fact that they aren't, you know, anywhere near one another.

I mean, really, guys. What would Taylor Swift think?

Thankfully, the likelihood that Bieber and Gomez are actually back together appears to be slim to none and, really, we should have been prepared for this to happen sooner or later. This might be the first time since January 2015 that the pair have been seen together, but they have been together for years, on and off. They've both stated repeatedly that they care very deeply for one another and will always care very deeply for one another. Expecting Gomez to completely cut Bieber out of her life was kind of a tall order, just as it would be ridiculous to expect Bieber to completely stop caring about her just because they're not dating anymore.

I'll keep my fingers crossed that they don't try the whole dating thing again — or the fans might actually have a meltdown the way they have been Thursday morning.

More like this
Selena + Chef Season 4 Was Filmed At Hannah Montana's Old Malibu House
By Jake Viswanath
Selena Gomez Has Been Spotted Having Fun With A Top Film Producer
By El Hunt
Leona Lewis & Husband Dennis Jauch Welcomed Their First Child
By Darshita Goyal
Who Is Camila Cabello Dating? She's Getting Cozy With Lox Club CEO Austin Kevitch
By Radhika Menon
Get Even More From Bustle — Sign Up For The Newsletter