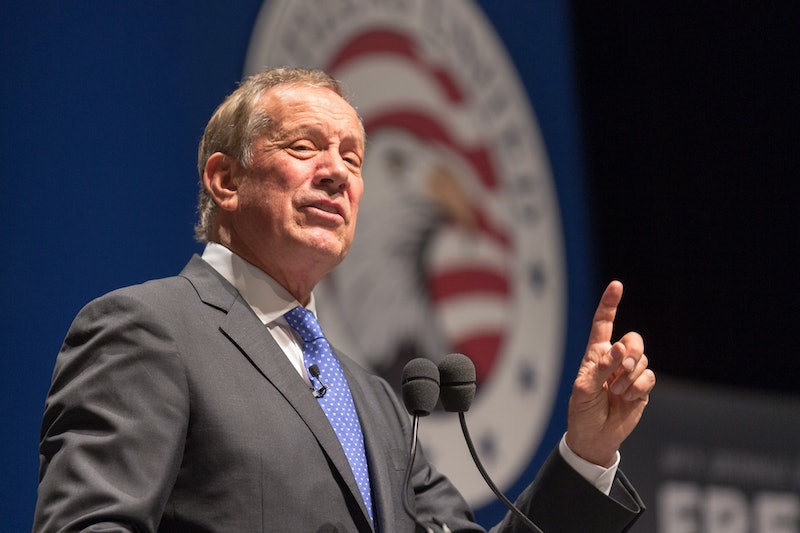 In a hectic gaggle of Republican candidates, George Pataki's bid for president is unlikely to make much headway. The video announcing the former New York governor’s candidacy was large on swelling emotion and pronounced patriotism, small on actual policy. But Pataki stands out for being the most centrist of the GOP’s increasingly crowded primary field (subject of “Suiting Up,” this week's sardonic New Yorker cover), and his time as red governor of a blue state prominently featured in his announcement video. Certainly, his stance on various issues — gay marriage, for example, or the environment — boosts his more-liberal-than-the-rest credentials. So, where does Pataki stand on women’s rights?

Pataki, 69, may find it difficult to raise money for his campaign, The New York Times reports, and as a long-shot candidate, he may even struggle to reach the national debates. His social policies, the newspaper notes, severely damage his chances with the conservative voter base, except in the state of New Hampshire, where Pataki has campaigned strongly in the past and where his somewhat liberal take on key social issues does not automatically disqualify him in the eyes of the Republican electorate. One of the issues on which Pataki takes a resolutely unorthodox (in a GOP context) stand, is abortion.

Pataki, unlike his fellow Republican candidates, favors abortion rights, considering himself “pro-choice.” This has got him into trouble, unsurprisingly, with his conservative brethren. Once, at a gala for the New York-based Conservative Party, William F. Buckley contemplated audibly “whether the only abortion law Governor Pataki would oppose would be one that threatened the rights of gays and lesbians.” Pataki was seated right beside him.

Yet Pataki’s support for abortion is hardly no-holds-barred, as Buckley suggested. In fact, the former governor has spoken against late-term abortions, and as a state legislator voted against state-funded terminations.

Pataki's commitment to women’s reproductive rights only stretches so far. In 2005, when Pataki was New York’s governor, he had the chance to sign a bill into law that would have made emergency contraceptives available to women without a prescription. Pataki decided to veto the bill, provoking the ire of the state’s pro-choice activists. At the time, his aides stipulated that the decision was due to Pataki’s concern that the bill’s wording would not bar minors from accessing the contraceptives.

But that veto may have been a simple bit of political calculus: considering a 2008 presidential bid, Pataki couldn’t afford to support a law that would discount him from the Republican competition. And Pataki, clearly aware that his stance on social issues will win few Republican friends, recently chastised his colleagues for their focus on social policy rather than the economy or national security. “We are debating social issues like abortion and gay rights. They are a distraction and will only help elect Hillary [Clinton],” he is quoted by The Wall Street Journal as saying.

A “distraction?” The wording is infelicitous, suggesting that Pataki’s approach to the issues he cited are mere matters of political expediency — a result of having to juggle for a long time the liberal impulses of New York against the conservatism required on the national Republican stage.

But an odd incident in Pataki’s past suggests that this may not be the case — that Pataki really is heavily invested in women’s rights. Or, rather, just women in general. In 2000, in his role as governor, Pataki proposed a plan to erect a museum in New York devoted to women’s history. The Museum of Women: The Leadership Center was intended to be a $125 million project, based in Battery Park City. At the time, Pataki said the idea for the museum had emerged out of a one-year commission he had appointed in 1998, to honor women’s achievements in the state. New York’s women’s rights advocacy groups embraced the move, The New York Times reported at the time.

But seven years later, the New York Daily News was grumbling that Pataki had sunk $3 million in the project, and the museum had not appeared. Pataki had just bowed out as governor, and the land would be repurposed for something else. A Pataki spokesman told the Daily News that the former governor was disappointed the museum “wasn't able to gain the traction it needed to move forward.”

Traction and forward momentum may, once again, be in short supply for George Pataki. And his somewhat confused stance on birth control and women’s rights may not help to win him any followers. But, if there’s one thing the polls indicate, it’s that the Republicans could do worse than attempting to win over female voters (53 percent of whom voted Democrat in last year's midterms). Pataki, sad to say, looks like one of the most female friendly voices the GOP has got. How he’ll present his opinions on social issues now he’s entered the race remains to be seen.