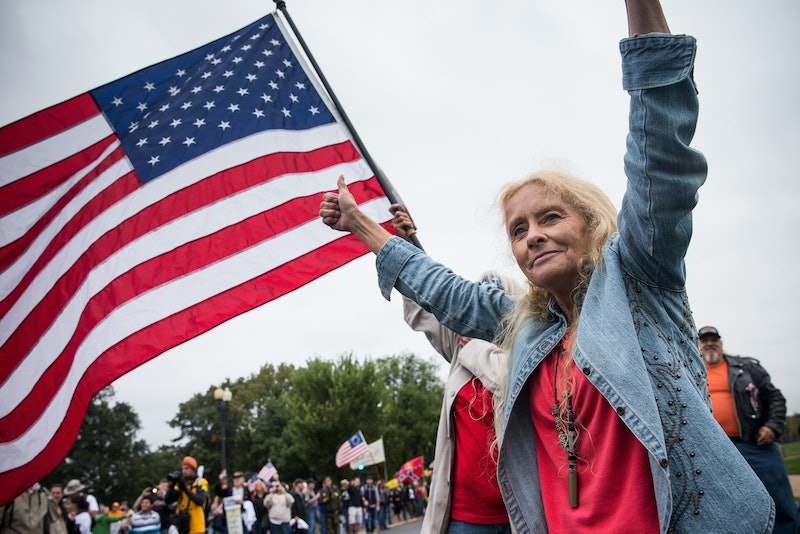 Across the nation, people are commemorating Veterans Day. It's a holiday when we pause to appreciate military service and remember that veterans have pressing needs: more than ever, former service members struggle with poverty and homelessness. But today, thanks to record numbers of women enlisting, there are also more female veterans than ever before. We hear a lot about the difficulties these women face while in the military — reports of sexual assault are up by a shocking fifty percent from last year — but the challenges are far from over when they get out.

Back in the 50s, female soldiers made up just two percent of the armed forces. Today, roughly 11 percent of U.S. veterans are female, and it's estimated that by 2040, that figure will have risen to 18 percent.

So how does it go for women when they step out of their uniforms? Not too well, it seems. While it's a well-known fact that male veterans struggle with employment, their unemployment rate is actually only 6.7 percent — while the unemployment rate among female vets is currently at eight percent (although that's better than last year, when that figure was 9.5 percent). And though homelessness tends to be dominated by a generally male vet demographic — on any given night last year, it's estimated that over 62,000 veterans were without a home — women veterans are quickly catching up. As the New York Times reports:

[Women] are now the fastest growing segment of the homeless population, an often-invisible group bouncing between sofa and air mattress, overnighting in public storage lockers, living in cars and learning to park inconspicuously on the outskirts of shopping centers to avoid the violence of the streets.

Piled on top of the common issues that come part-and-parcel for male returnees — like substance abuse, PTSD, and mental illness — many women may also be dealing with the effects of trauma from sexual assaults during their service.

From October 2012 to June 2013 alone, the U.S. Department of Defense received over 3,500 military sexual assault reports; an almost a 50 percent increase from the year before. Even more worryingly, a recent Pentagon survey suggests that roughly 26,000 service members received unwanted sexual contact in 2012, but that only 3,374 incidents of assault were actually reported. And according to the Department of Veteran's Affairs, roughly 1 in 5 women will respond "yes" when screened for Military Sexual Trauma. It's clear, then, that many women deal with the effects of sexual trauma in silence, and, for that reason, issues of homelessness amongst women can in fact occur before they even leave the military.

This ties in directly to another issue that faces veterans: an alarmingly high suicide rate. Nearly one in five suicides in the U.S. is carried out by a veteran, with 49,000 vets committing suicide between 2005 and 2011. That's one suicide roughly once an hour. And it's especially bad for women: studies have shown that female veterans, especially those between the ages of 18 and 34, are three times as likely than their civilian peers to take their own lives.

Why? A recent study showed that a surprising amount of veterans commit suicide not because they're having trouble readjusting to "normal" life after a war environment, but rather because they're dealing with alcoholism and mood disorders that are exacerbated by financial pressures and isolation — 77 percent of all returnees who died by suicide never actually saw combat. Think of the isolation caused by those silently coping with sexual trauma, and it's easy to see why some women have it especially rough.

On Monday, President Barack Obama vowed to “ never forget” the sacrifices made by the country’s vets, promising that the administration's "time of service to our newest veterans has only just begun." With two wars only recently over, you better believe it.

Let's hope he follows through on that promise.