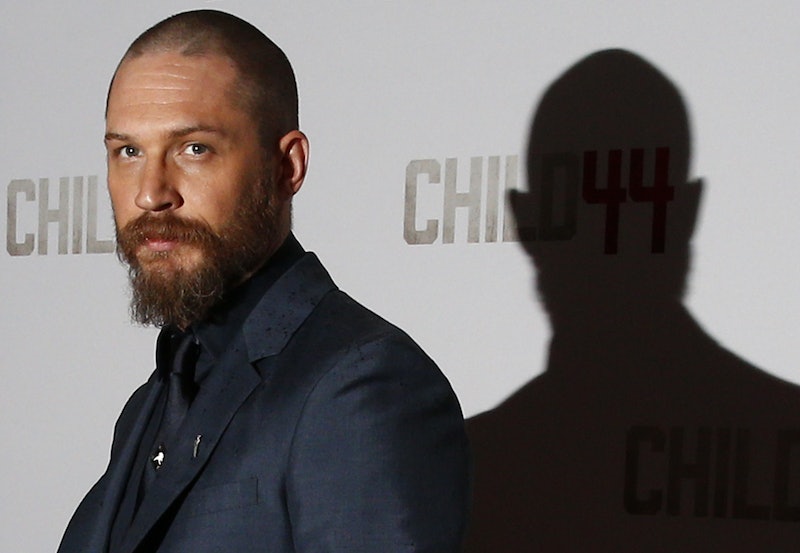 Tom Hardy is fighting the good fight against sexism. The Mad Max actor proved this much during a Cannes press conference for the film, when he responded perfectly to a cringe-worthy question from a reporter about his female co-stars. Peter Howell asked, "Tom, I’ll preface my remarks by saying that I have five sisters, a wife, a daughter, and a mother so I know what it’s like to be outgunned by estrogen. But I just wanted to ask you, as you were reading the script, did you ever think, ‘Why are all these women in here? I thought this was supposed to be a man’s movie?’" Yikes. Luckily, Tom Hardy shut down the seemingly sexist question in the best way. Bustle has reached out to Howell for comment, but has not yet heard back.

The actor responded, "No. Not for one minute." He then gave the camera the best side-eye that Hollywood has seen in a while, and quickly changed the subject. How? By noting the lack of the movie's script, which was a cause for more concern for him than the number of female actors around him during the filming. What makes it even better was that he was able to scoff at the question without letting it take center stage and distract from other questions about the actual movie. So essentially, it was an flawless takedown. And it will probably make you like Hardy and want to hang out with him even more than you already did.

After all, it is always a wonderful thing to see a man stand up for women and the way that women are represented in Hollywood. The fact that Hardy did not hesitate to do so shows his strong belief in how women can do anything men can do, even star in a so-called "man's movie." It is worth mentioning, as USA Today pointed out, that Howell's question may have just been phrased poorly, especially since he recently wrote a piece about the film that was much more women-friendly. But nevertheless, Hardy's response is a fantastic show of support for equality. I think most women can at least appreciate a high-profile man proving himself as a strong ally.

The actor follows a pattern of other male stars stepping up to the feminist plate, like Harry Styles, who shared his support for Emma Watsons' He For She campaign with his many fans, and Aziz Ansari, who explores the importance of feminism onstage during his comedy shows. Hopefully this wonderful trend will inspire other male stars in Hollywood to follow suit.

Watch the epic takedown in the video below, and see what you think!