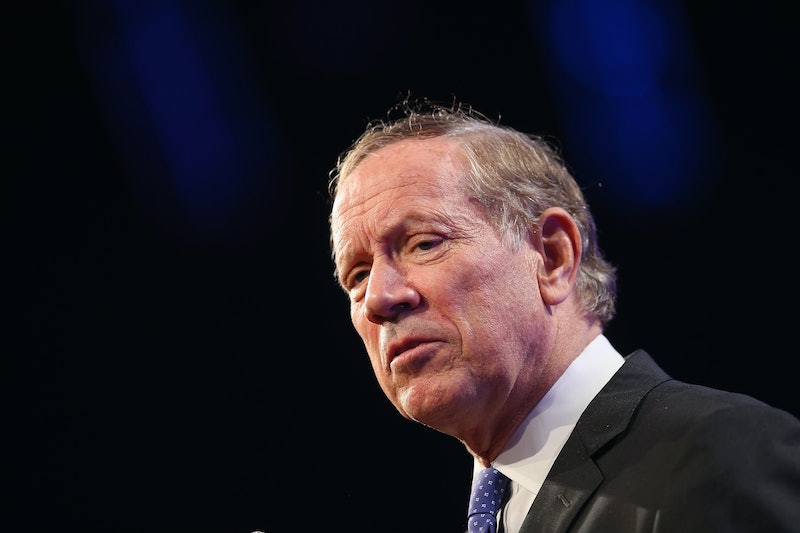 Even though it was his campaign announcement video, George Pataki was not the only star in it — New York City played an equally significant role. The former New York governor relies heavily on New York City as a symbol of not only American resilience but also his leadership abilities, which he exhibited when Pataki dealt with the 9/11 attacks firsthand. In the video, Pataki says he led New York City through 9/11 and helped the city heal in the wake, a unique experience that gives him an edge in fighting the current biggest terrorism threat, ISIS. However, others seem to disagree with his 9/11 legacy.

Pataki was in New York City the day the Twin Towers were hit, which he saw with his own eyes. He described being on the scene that day to the Post Star around the 10-year anniversary of the attacks:

My daughter had called after the first plane hit, and I was on the phone with her. And then I saw the second plane hit and knew right away that we were being attacked and I started to take action.

He also gave one story as an example of how he helped New Yorkers heal in the aftermath:

I'll just never forget one obviously homeless gentleman coming up and giving me a hug, and me telling him, "We'll get through this," and his saying, "Thank you, I'm sure we will."

That message also forms the basis of Pataki's announcement video, which features various shots of the New York City skyline, many of which were filmed from the new One World Trade Center, a building whose development Pataki spearheaded. The running theme throughout is how New York City became a symbol of strength for all of America after 9/11, which Pataki conveys as follows:

We have always understood that we have a common background and a common destiny, and when we stand together, we can accomplish anything. I saw that on the streets of New York in the days and weeks after September 11. We understood that we were all Americans who had been attacked and were going to rise up together, and we did.

But that's not all. In addition to the galvanizing words and the poignant images of New York City, the video then clearly spells out Pataki's role in 9/11 with this message:

As Governor of New York, George Pataki led during the worst terrorist attack the U.S. had seen on American soil. His leadership inspired people of all backgrounds, factions, and beliefs to come together and work towards a better America.

As if the message weren't already loud and clear, the video ends with Pataki standing inside of Tower 4, overlooking the World Trade Center Plaza and One World Trade Center, also known as the Freedom Tower. He says without taking his eyes off the view:

I've been up on that tower. That's exactly what we hoped, that we would not just rebuild what was here, but build taller and higher and soar to new heights, and show people that we weren't going to think small or live afraid.

To further emphasize — and sell — his leadership skills in dealing with a major terrorist attack, he's also been pushing ISIS as the most pressing issue the American people should be focused on. He told CNN that he supports deploying ground troops to Iraq to fight ISIS while also distinguishing it from Bush's Iraq War:

No 10 year war, no massive casualties, but protect American lives before we get attacked here.

While Pataki's brand of patriotism might appeal to those who are less familiar with him, those who have followed his career as governor might question it as nothing more than a facade. In 2002, Andrew Cuomo, who was running on the Democratic ticket against Pataki during the gubernatorial elections that year, sharply criticized Pataki's performance during and after 9/11, telling reporters:

While Cuomo's aggressive denunciation ended up costing him the election (he withdrew from the race at the urging of Bill Clinton), it's true that Pataki never received the widespread and long-term recognition for being a leader during 9/11 that Mayor Giuliani did.

However, Pataki has been instrumental in the rebuilding of One World Trade Center and the National September 11 Memorial. For the former, he helped to establish the Lower Manhattan Development Corporation (LMDC), who was responsible for dispersing federal funding and overseeing construction on the project. As for the memorial, for which Pataki is an honorary chairman of the board of directors, he told the Post Star:

It is something that I thought from the beginning had to be the cornerstone of all that we did at Ground Zero, so that people would not just once a year think back to September 11th, but every day people from around the country and around the world would have a chance to visit the site and understand the magnitude of the loss and yet at the same time understand the courage and strength that New Yorkers responded with.

Pataki's 9/11 message couldn't be louder and clearer, but it remains to be seen if it will be enough to carry him to a primary victory.Images: Getty Images (3), GeorgePataki.com