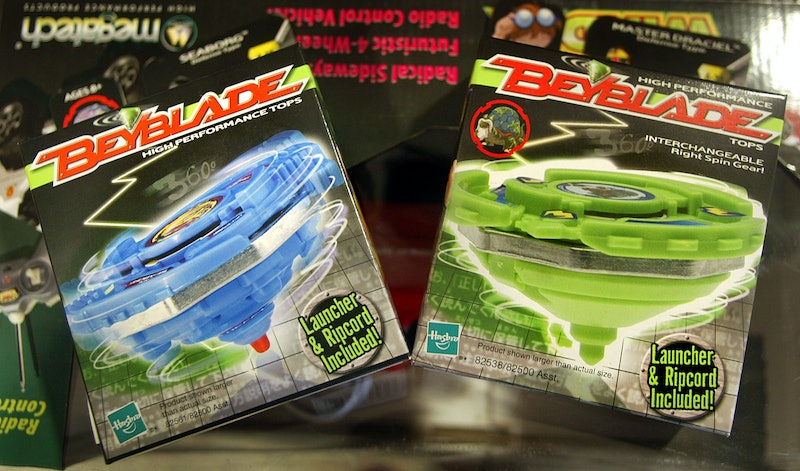 Hollywood has made a lot of question movies. Why did we need a movie based on the game Battleship, or that Ouija movie that's now getting a sequel? But things are getting a whole lot more weird. In continuing the now rich tradition of making movies centered around toys and games, Deadline reports that a live-action Beyblades movie is now in the works. You know, those little spinning tops that your younger siblings, cousins, friends' kids are playing with? Yeah, Paramount Pictures is spearheading that project.

This is just the latest in a long line of toy-to-movie adaptations. Aside from the first Ouija and Battleship, we've already seen the Transformers movies explode onto the screen, as well as films for G.I. Joe, Bratz dolls, Dungeons & Dragons, Clue and Care Bears, to name a few. But there are a whole lot more where these came from, and even more in the works. As we saw from the trailer, a live-action Jem and the Holograms movie is on the way, as is an animated Angry Birds feature film.

But here are the ones you probably didn't know about...

Mary Parent from Distribution Entertainment is on board the Beyblades movie as a producer. Though it may seem farfetched, I can already see how they might try to spin (forgive the pun) this into the big-screen format: each top is customizable, often times pegged to a mythological beast, and kids drop them into an arena to watch them battle and knock the other out of bounds. Perhaps it'll be like Pokemon, and the monsters will emerge from their Beyblades to fight for their masters.

This one, more so than the others (though that's debatable), sounds like a joke. But, nope, this one is all too real for comfort. According to The Guardian, Hasbro confirmed back in 2013 that it's planning to bring Hungry Hungry Hippos to life on the big screen. Emmet/Furla films is producing this animated venture, though no developments have been reported for some time. I'm not sure how I feel about that.

In addition to Beyblades, Paramount is also responsible for turning Monsters Trucks into a movie. Chris Wedge, who directed Ice Age, Epic and Robots, is on board to helm the live-action, CGI-animated film that is said to be an original concept centered around this product line.

I'll be brutally honest with you: I was one of those kids in high school who was in the closet... as a player of Magic: The Gathering. But with Fox looking to create a new fantasy epic for the big screen out of this card game, perhaps all us geeks will rise up to dominate the world. For all you Game of Thrones fans, keep in mind that the Magic movie will be written by Bryan Cogman, who wrote seven episodes of the hit HBO series. Meanwhile, Simon Kinberg, who produces and writes for Fox's Marvel movie division (i.e. the X-Men and Fantastic Four films) is on board as a producer.

The Candy Land movie might never get made, because it was hit with a massive lawsuit. But the fact that it got as far as it did with Adam Sandler revving up to star in and produce the feature is astounding to me. The way things stand, it'll be stuck in the Molasses Swamp for all eternity.

Barbie is breaking out of the animated, straight-to-DVD movie realm and is headed for Hollywood. The latest update on the live-action (yes, live-action) Barbie movie is that Diablo Cody, the Oscar-winning screenwriter behind Juno, is rewriting the script. Walter Parkes, a producer on Barbie, said that "Diablo’s unconventionality is just what Barbie needs. It signals we’re going for a legitimately contemporary tone."

Mattel's line of monster-influenced dolls are coming to the big screen in live action, as the film is scheduled for release on October 17, 2016. It will tell the story of a group of teenagers who find their real identities while grappling with their secret identities at Monster High. Let it never be said that Hollywood isn't inventive.