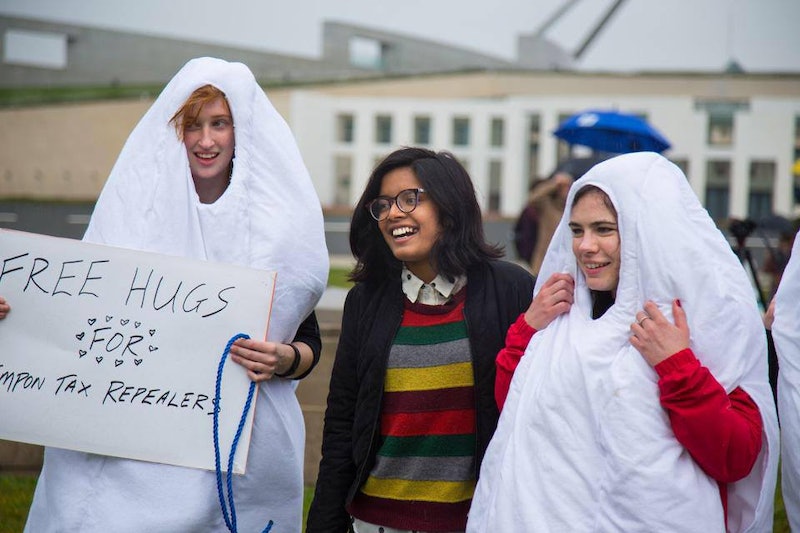 While Australia happily sells its citizens condoms, lube, sunscreen, and nicotine patches tax-free because they are classified as "important health goods," tampons, pads, and other period-related accessories incur a whopping 10 percent tax. And as most of us know, feminine hygiene products do not come cheap to begin with. But the Australian government doesn't deem tampons "necessary" enough to lift the tax on them. Because periods are optional? Because bloodborne pathogens aren't a thing? For how freaked out people seem to be about the appearance of menstrual blood, taxing the products that keep it out of your sightline doesn't seem to be the most efficient way of avoiding it.

Treasurer of Australia Joe Hockey admitted this week on Australian news show Q&A that he believes the tax is unfair, and a majority of state treasurers came out in support of lifting the tax. But Australian Prime Minister Tony Abbott refuses to consider the measure, citing that states wouldn't want to give up the estimated $25 million in menstrual product revenue. (Perhaps Prime Minister Abbott would like to put on his listening ears before making such declarations.)

She started an online petition in favor of ending the so-called "Tampon Tax" that gained almost 100,000 signatures, and this week, she took her activism to the next level. She stormed Parliament House with a bunch of supporters dressed as tampons to bring the issue — including the support of Treasurer Hockey — to the Prime Minister's attention. (My personal favorite protest sign is a tampon warrior declaring the flawlessly glib, "I'M PRETTY ESSENTIAL.")

The next meeting of Australia's state treasurers takes place this July, where Hockey promises to bring up the issue.