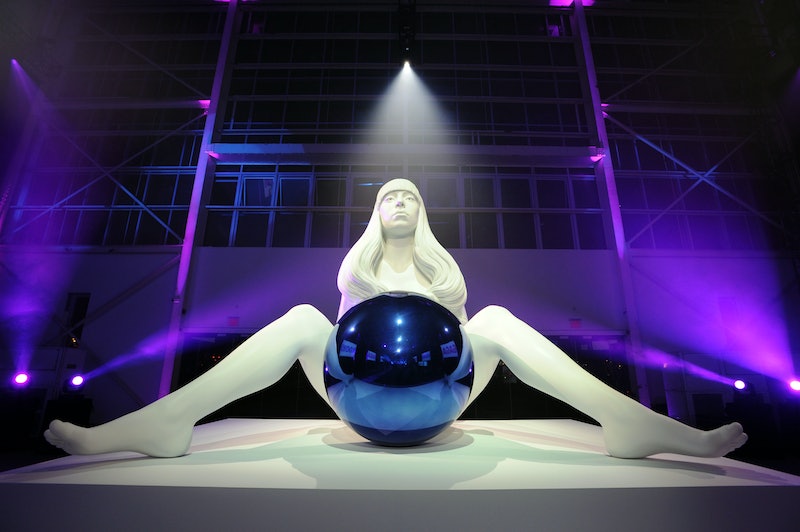 Lady Gaga had an artRave last night in — where else? — Brooklyn. Highlights include: Gaga showing up to the party WAY past fashionably late (she appeared at 12:45 AM), Gaga's flying dress, many Jeff Koons sculptures of Gaga, and Marina Abramovic (this woman is everywhere). But, honestly Gaga, it's time to sit down and chat. Because you need to know: You're trying too hard.

Previously, Gaga said ARTPOP would be the "album of the millennium." You can't just say that about your OWN album, Gaga. Some of the songs are catchy, I guess — "Aura" isn't half bad, although it still has some questionable lyrics. "Dope" isn't dope, but it's fine. I have never been a Little Monster, but I always appreciated Gaga's commitment to the strange, and her refusal to subscribe to more common pop star conventions. But I do think her artRave was just as much as media ploy as Miley's VMA performance (which, despondently, here we are still talking about).

Am I jealous that Gaga is close, personal friends with Jeff Koons, who has rendered her splay-legged likeness above? Yes, of course. Would I want to wear a flying dress with a name like Volantis? I don't know, maybe. Probably. That's precisely my problem, though — Gaga is aiming to incite these art revelations and revolutions, but it's not quite working. Of her airplane garb, she said she wanted to create "a garment for the youth of the future." That kind of self-congratulatory, though, isn't it? "I'm the voice for the future" talk is so cringe-worthy.

But maybe this is exactly the conversation Gaga wanted us to have. Maybe we are SUPPOSED to be discussing how over-the-top and self-aware all her ARTPOP antics and promotions are. Maybe that is the point of ARTPOP? Seems unlikely, though, especially with the addition of ARTPOP's complicated, overblown Tumblr-y app (that allows you to make GIFs with galactic backgrounds, cats, and block text). It's all just TOO much, and Gaga needs to stop reminding us, "I'm making art! I really am! My album has art in the name!"

Because, Gaga, you were at your most artful during the simple days of "Bad Romance." It's been far too long since you've made us really say (Gaga) oh la la.

More like this
What Is Ariana Grande's Net Worth? When It Comes To Money, She Has No “Problem”
By Hugh McIntyre
The Best Memes & Tweets About Lady Gaga Reportedly Joining 'The Joker' Sequel
By Grace Wehniainen
Everything To Know About The Musical ‘Joker’ Sequel – & Lady Gaga’s Role
By El Hunt
Kanye Joked About His Divorce To Kim K In A Surprise Speech At The BET Awards
By Alyssa Lapid
Get Even More From Bustle — Sign Up For The Newsletter