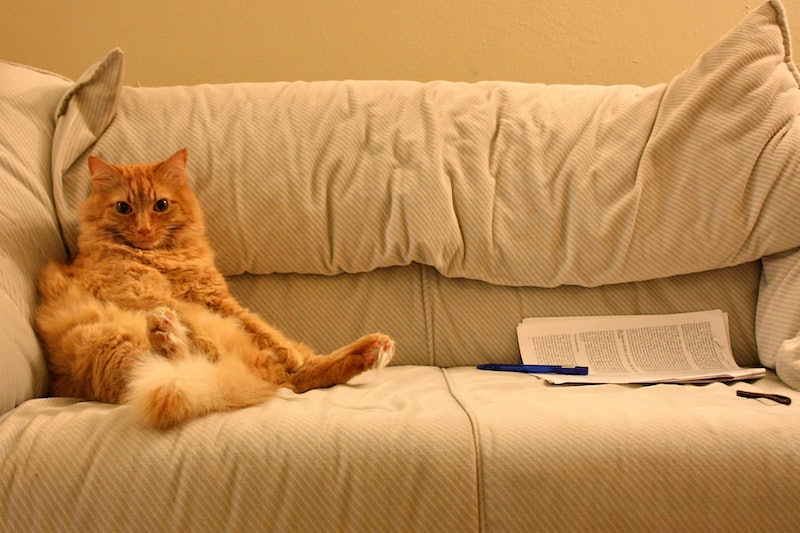 Before I proceed to diagnose your life problems, I’d like to begin by telling you who I am and who I am not. First, who I’m not: I am not an outlandishly successful person. I’m not a fitness guru, or a billionaire entrepreneur, or a famous actor. I can’t tell you how to get to any of those places because I’ve never been there myself. So feel free take my advice with that rather large grain of salt.

However, unlike some of those people, I’m also not totally out of touch with what it’s like to be a normal human being. You know, the kind who indulges in things like french fries and Netflix and being horizontal; and who has to worry about mundanities like bills and the fact that dish level has officially surpassed sink level and now I have to raise the faucet above Plate Mountain just to get a glass of water.

Still, I am someone who has aspirations. And in order to achieve those aspirations, I have to figure out a way to combat both my anxiety and my monumental laziness. Thus, I am also someone who’s done a solid amount of research into finding and synthesizing exactly the kind of data-driven advice that I myself need to hear — and I’ve put those guidelines into practice with some degree of success. After all, I like, wrote this article and stuff. So clearly I can do at least one thing that isn’t described by the word “binge-watching.”

1. You dwell on past regrets.

My biggest regret is not taking better advantage of all the opportunities I had in college. I could look back with empathy for myself, acknowledging that my college experience was heavily colored by the anxiety and depression I was struggling with at the time (and by the general alienation I felt within a casually misogynistic campus culture). More often, though, I just beat up on myself (emotionally) for not optimizing all the time that I had to self-discover.

Plenty of studies show that regret can be a good thing — when it’s informative and motivating. However, dwelling on past regrets is, by definition, a waste of time. More importantly, it’s a waste of an even more precious and limited resource: mental energy. After a while, it can even have detrimental effects on your physical health.

What To Do Instead: The trick, according to researchers, is to harness regret’s functional aspects — a.k.a., learning from your mistakes instead of harping on them. One practice I’ve developed for when I find myself going into regret-mode is to reframe the question: to go from, “What do I regret about the past?” to, “What will I regret in the future?” In the immediate future, I know that I’ll regret not going to bed at a decent hour because I chose to catch up on Mad Men instead. This practice of “future-tense-ifying” the regret question actually kills two birds with one stone: it’s a tool for both motivating yourself and getting out of that rabbit hole of self-denigration.

2. You’re constantly comparing yourself to others (and you never feel like you’re doing as well).

When Shakespeare wrote: “All the world’s a stage,” I wonder if he could have even imagined this postmodern, social-media-drenched world — and how apt that adage would become to describe it. Whether it’s trolling your friends’ Facebook photos or sizing yourself up on Instagram, who can really escape feeling inadequate these days? But comparisons are just as negative as regrets: they’re a sinkhole for time and energy, and the phenomenon of “negative social comparison,” as it’s called in psychology, is linked with anxiety, depression, and even making worse choices for ourselves.

What To Do Instead: The best thing we can really do for ourselves is to preemptively limit the time we spend on those platforms. For this, I’ve downloaded an app called RescueTime onto my laptop. It keeps track of how much time you spend on both the sites you visit and the software applications you use, and the upgraded version can even block social media sites for a specified amount of time (like making sure that you can’t visit Facebook and Twitter during work).

My rule of thumb is no more than two visits to Facebook, Insta and Twitter per day, and for no more than 10 minutes each. Beyond that, I have a rule for myself that I’m literally not allowed to click into anyone’s personal photos — I can only scroll the news feed and check notifications.

3. You have a tendency to put either too much on your plate — or nothing at all .

I struggle with this one a lot. One day, I’ll go from 10 hours at work to two hours at the gym to studying for the GREs to cleaning my room to working on an article to PTFOing at 2 a.m. — with no chance to relax and restore. The next day, I’ll spend every hour of free time watching Dexter and eating Ben and Jerry’s. Trying to break out of this cycle, I realized that I have a hard time with consistency because I’m letting my anxiety dictate my intentions. And that’s the thing about anxiety as a motivator: it isn’t one — or at least, it’s not a sustainable one, because it runs on hormones that are physically exhausting and depleting of your actual energy.

What To Do Instead: Allocate a certain amount of time to each project, and then set a timer for it. When you think about tasks in concrete and bite-sized intervals — say, 45 minutes of writing or 15 minutes of exercising, for two of my personal Goldilocks-sized examples — it seems much less daunting to just get started. I always tell myself: if you can just do 45 minutes of work on your next article, you can be done for the day. It makes it that much easier to dive in.

By the time I reach that limit, I’m usually so “in the zone” that I want to keep going — so I do. But the key is that I don’t have to. Sometimes, when I’m out on a jog (or, more accurately, a brisk walk with some light jogging intervals here and there) and that timer hits 15 minutes, I really do just stop. But if I do those 15 minutes four times a week, then that’s a full hour of exercise that I wouldn’t have done at all because I’d have been dreading it too much. So that counts as a great success!

Along these lines, be sure to actively, consciously reward yourself for achieving the littlest bits of your goals at a time: Grab some chocolate, splurge on a 30-minute massage, or even just pat yourself on the back and say out loud that you’re proud of your accomplishment — no matter how small. The science of changing habits supports this: The brain is habit’s slave, so we have to retrain our brain by aiming small at first, and then actively and consciously applauding ourselves — activating that magical neurochemical reward system — for each teeny-tiny step in the right direction.

4. You spend more time stressing over decisions than actually making them.

This one is a real doozy for me. I go through an existential crisis every time I have to choose a cereal at Stop & Shop, and as a twentysomething, I’m frequently confronted with far more consequential choices than that — like where to move, which career path to pursue, whether or not to go to grad school, and so on. Combine that with an anxiety disorder and you’ve got a potent recipe for analysis paralysis.

What To Do Instead: Apparently there is an app for that, though I haven’t yet tried it out myself. What I have tried, quasi-successfully, are good ole’ list-making sessions. I'm a huge fan of lists because they lend a sense of external order to my messy internal world, allaying some anxiety in the process. I make "pros and cons" lists all the time for big decisions.

But here's the thing about pros and cons: you have to trust how you feel about the list more than the list itself. More often than not, I'll realize that I've been subconsciously looking for ways to bolster one side of the list and short-change the other side. If you find yourself wishing you could tip the scales, then congratulations! You already know the choice you want to make — you just had to go through the process to get there.

As those of you who are Malcolm Gladwell fans already know, the evidence in support of trusting your initial instinct over agonizing through piles of data is pretty strong. So if something inside you is whispering, “Go for it” — even if the cons outnumber the pros five to one — then you damn well better go for it anyway. One key point to keep in mind while making decisions is that it’s a lot likelier that you will ultimately regret choosing the safe route over trying something new. And since a lot of life’s big decisions can be boiled down to staying within your comfort zone versus taking a risk, I find that “go for it” as a rule of thumb generally serves me pretty well.

5. You let the external dictate the internal.

There’s always going to be someone who wants something for you that you don’t really want for yourself. Whether it’s your parents, your peers, or the myriad pressures of society in general, the temptation to give in to outside forces is overwhelming. We might not even consciously realize that we’re doing it — at least, not until we’re in our forties, divorced, and going to intensive therapy twice a week.

What To Do Instead: I’ve adopted this one simple practice: attuning myself, like a heat-seeking missile, to any occurrence of the word “should” in conversations with others or in my own ongoing internal dialogue, and then visualizing it literally exploding.

This is why I try to literally visualize the "shoulds" exploding or disintegrating before they can permeate my defenses. Research suggests that mental imagery can help you succeed in a host of different ways, including increasing motivation, self-confidence, and creativity. So I figure it can probably help destroy the mental blockades to all of those things as well.

After all, if there’s anything that all of the best leaders and innovators share, it’s that at some point, they all looked at the status quo and said: screw that. They all defied the overwhelming pressure to take the easy road, or to live a more normal life, in order to pursue what they really wanted.

More like this
6 Abortion Advocates To Follow On TikTok
By Sara Youngblood Gregory
How To Take A .5 Selfie On An iPhone
By Emma Carey
YouTuber Runs Into Margaret Sanger’s Grandson While Filming
By Alexis Morillo
Side Character Energy Has Arrived — Here’s What That Means
By Sophie McEvoy
Get Even More From Bustle — Sign Up For The Newsletter