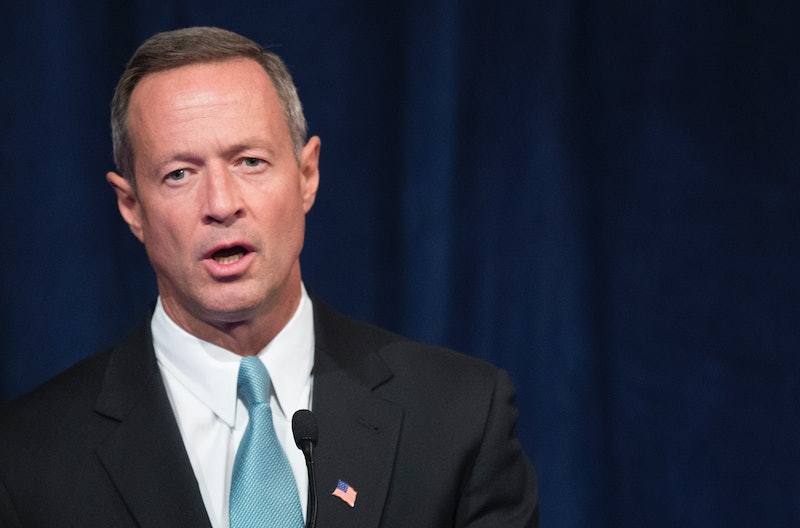 Marriage equality for same-sex couples is the biggest civil rights issue of our time, and that is a big boon for the newest entrant into the presidential race. Former Maryland governor Martin O'Malley sees gay marriage rights as a way to protect all children and has publicly advocated for marriage for quite some time. He'll likely make the issue a major part of his political platform, which in turn will hopefully influence the candidates around him.

In 2013, a then-Gov. O'Malley signed a bill that legalized same-sex marriage in Maryland, marking the first time in the United States that marriage rights were given to gay couples by popular vote. O'Malley had made gay marriage one of his top priorities and had actually put his name on the bill as its sponsor. Soon after the bill became law, O'Malley penned an opinion piece for The Huffington Post, explaining why he made same-sex marriage legal in Maryland. He wrote that every child deserved to be raised in a loving and caring home that's "protected equally under the law," whether that house is owned by a heterosexual or gay couple.

With that kind of public record of support for gay marriage, O'Malley has confidently spoken against other candidates, even before he announced his intent to run. Last month, he called out Democratic front-runner Hillary Clinton on what he saw as flip-flopping on the issue of marriage equality. Soon after Clinton announced her intent to run for president, a spokeswoman said the Democratic candidate considered gay marriage a Constitutional right. When she ran in 2008, Clinton was opposed to same-sex marriage. O'Malley saw that as an opportunity to subtly throw some political shade, telling The Guardian:

I’m glad Secretary Clinton’s come around to the right positions on these issues. ... Leadership is about making the right decision, and the best decision, before sometimes it becomes entirely popular.

Given the Supreme Court's soon-to-be announced decision on whether the Constitution guarantees same-sex marriage, the issue of marriage equality will be a big opportunity for O'Malley to shine. If that kind of rhetoric from O'Malley finds success on the campaign trail, maybe other candidates, including Clinton, will find reason to speak louder in favor of gay marriage.