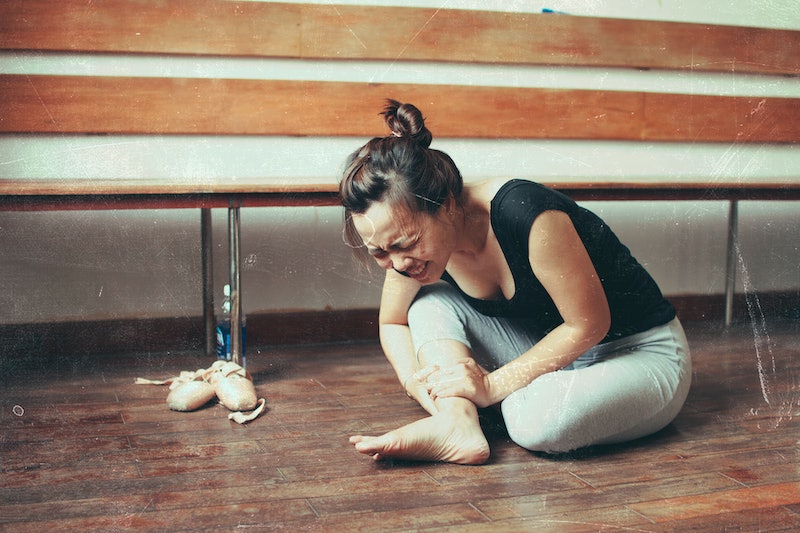 Most of us have grown up hearing that women feel more pain than men, whether it's after surgery, while dealing with a chronic illness, or just after getting a boo-boo. In fact, a 2012 Stanford study of 72,000 adult patients discovered that women reported feeling pain more acutely than men, no matter what kind of health issue they were grappling with — whether it was migraines, fibromyalgia, or acute sinusitis. But despite this accepted fact, there's also a body of evidence that shows that women handle pain better than men, too, because we're just that awesome — or perhaps because we're more used to it, or just culturally conditioned to not complain.

Pain attracts a lot of scientific research attention because pain is more than just an annoyance. Pain is actually an alert system that helps us recognize problems and threats in the body — so folks who can't feel pain (a syndrome called congenital analgesia) miss out on the signs when something is amiss with their health, and thus have less of a chance to take care of themselves before problems worsen. So a little pain is necessary in all our lives — it just might help us stay healthy. But does being born with two X chromosomes really doom you to a more painful life?

Read on to find out six facts about really happens to the female body when it's in pain and what's really behind these gender differences.

1. Women And Men Experience Pain In Different Parts Of Their Brains

It's not just that women feel pain more intensely that men. We seem to feel, or at least perceive, pain in a fundamentally different way altogether than men do. A major 2014 study of 10,200 German hospital patients showed that men and women, when asked to choose which types of surgery were most painful, came up with radically different answers. Women reported more pain after minor invasive surgeries like biopsies, while it took a major operation for men to complain. What's going on there? How is one woman's biopsy the same as one man's appendix removal?

A lot of different factors could be called upon to explain gender-related differences in how we process and categorize pain. It seems that while the brains of men in pain release endorphins to help them cope, women's brains just don't (which is pretty damn unhelpful). Women also tend to process pain emotionally, in their limbic systems, while men often experience it utilizing the cognitive element of their brains.

2. Women Tolerate Pain Better Because We Experience More Of It

How we cope with pain isn't solely based on our chromosomes, though. Our increased exposure to pain may be what makes women better at coping with it. Tolerance for pain has, it seems, a lot to do with what happens in your head. If you've experienced a lot of pain before, you're likely to cope with it better in the future. And as an ABC news investigation into the pain-gender question in 2014 found, women suffer from more painful diseases in general than men. Which is really, really unfair. But also possibly why so many of us are good at keeping a stiff upper lip, even when menstrual cramps make us feel as if a gopher is trying to escape from deep within our uterus.

The typical woman's vast body of personal experience with pain may explain why most women keep their agony to themselves. The conventional scientific wisdom is that men are the strong and silent types when it comes to pain, not admitting they're feeling bad until things get serious — but recent research shows that women chronically underreport painful symptoms to their GPs, likely because of societal pressures, fear of being labelled complainers, and greater domestic responsibility. Of course, suffering in silence isn't good for anyone, no matter your gender — pain often signals a health problem that needs serious medical attention.

Weirdly, the most female pain of all — childbirth pain, which is probably one of the most excruciating things anybody can go through on this earth — wreaks some strange havoc on our memories. Studies have shown that if you ask women about the pain level of their birthing experience, their answer won't take into account how long the labor was. They'll only remember how intense the pain was (unless they had an epidural, which understandably dims the memory a bit), but won't rate it as necessarily worse because they had it for, say, 28 straight hours.

But while a lot of the research about women and pain seems maddeningly vague, at least a few studies have yielded practical information that might change how painful medical procedures are practiced. A 2005 study of the nerve receptors on the skin of the face found something peculiar. Women's facial skin had an average of 34 nerve receptors per square centimeter, which pick up on sensation. Men had an average of 17. The author of the study, Bradon Wilhelmi, reported that since "women have more nerve receptors, they may experience pain more powerfully than men, requiring different surgical techniques, treatments or medicine dosages to help manage their pain and make them feel comfortable."

6. Women May Feel Pain More Intensely Around A Partner

Most of us think that the support of a partner can only be a net gain when it comes to handling pain. But, surprisingly, some studies have shown that labor pain can increase when a partner is in the room. The presence of a partner in the delivery room while a women gives birth significantly increases the woman's pain if she's not a person who "seeks closeness" — i.e. emotional intimacy — in relationships. And some scientists believe that men in the delivery room, even if they're heavily emotionally bonded with their ladies, might prevent birthing women from producing oxytocin, which is meant to help with pain relief.

For the most part, the differences in how women and men experience pain are still too tangled and complex to yield helpful innovations for our daily headaches and elbow scrapes. But we do have enough information to know at least one thing: Your many experiences with pain give you the right to shut down the next dude who tells you that you "couldn't possibly understand" how painful it is to get hit in the balls.