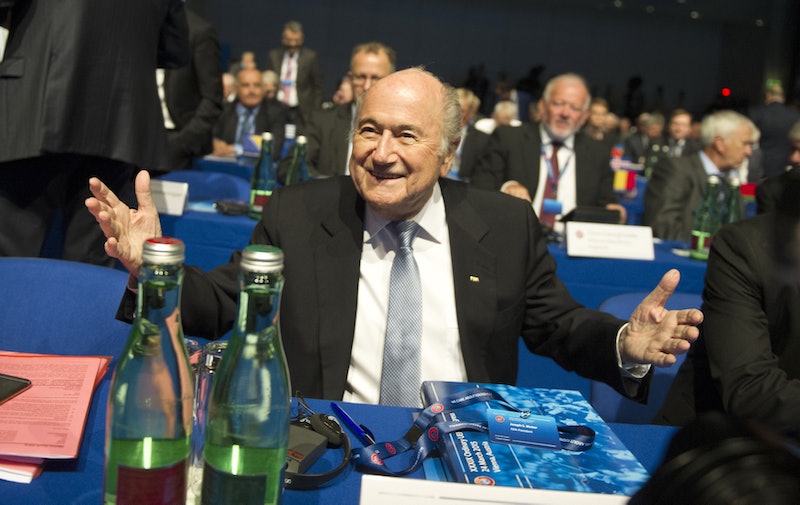 In the midst of furious controversy, FIFA President Sepp Blatter won a fifth term in football’s governing body’s presidential election Friday. Despite calls for Blatter’s resignation in the wake of a corruption probe that saw the arrest of nine top FIFA officials Wednesday, on charges including racketeering, wire fraud, and money laundering, the incumbent president refused to step down. Instead, Blatter promised to clean up FIFA — an organization he has presided over for 17 years — and the scheduled vote went ahead as planned. Blatter, as expected, prevailed over the only other presidential contender, Prince Ali bin al-Hussein of Jordan, to secure another four years at the helm. "I am not perfect, nobody's perfect, but we will do a good job," Blatter said in his presidential acceptance speech. "Let's go FIFA!"

According to the FIFA voting rules, a candidate wins outright if he secures two-thirds of the vote in the initial round; that is to say, 139 out of a possible 209. Blatter walked away easily with a victory — disappointing Prince Ali, who had promised reform and had spoken optimistically of his chances in Friday’s election. Before the vote took place, it was announced that the victor would make no public announcement on Friday, with the post-vote press conference postponed until Saturday. Blatter’s reaction to the win has not, therefore, been aired.

But he had a platform to speak earlier in the day, with a presidential address as Friday’s congress kicked off. Blatter spoke for well over half an hour, The Guardian reported, although his address contained few real details on how he might set about battling corruption. “You will know that right now we are going through troubling times,” he began. “I will not call in unprecedented … These events have cast a shadow so let’s try to lift that shadow. Let’s try to lift our spirits. We can’t let the reputation of football be dragged through the mud like that.”

He also, very pointedly, distanced himself from his detained colleagues — one of whom is former FIFA vice-president Jack Warner. “[T]hey are truly at fault, especially if they are found guilty,” he said, adding:

They are not the entire organisation; certain individuals who have forgotten that FIFA is based on respect, discipline, and a team sport with the same goal. We need to be singing from the same song sheet, especially when we talk of the character of the organisation. It’s our goal to share this respect with all of you.

Yet despite Blatter’s attempts to emphasize his own innocence, he has faced harsh criticism in the fallout from the corruption probe. True, the president was not among the top FIFA officials arrested at a luxurious Zurich hotel Wednesday morning. But, as The New York Times points out, Blatter has masterfully avoided any punishment in the past despite constant corruption claims against the organization. Kelly T. Currie, acting United States attorney for the Eastern District of New York, is quoted by the Times as saying that Wednesday’s arrests were “the beginning of our effort, not the end.”

The indictments came as part of a two-pronged investigation, which will examine the awarding of the next two World Cups to Russia and Qatar, respectively. “It is not over. The work will continue until all of the corruption is uncovered and a message is sent around the world,” FBI Director James Comey said Wednesday. Whether Blatter will be investigated or not has been kept under wraps, although FIFA spokesman Walter de Gregorio has told the Associated Press, “He is not involved at all.”

The proclamation of innocence hasn’t stopped an outcry of no confidence in the FIFA leader. Several key sponsors of the organization — such as Visa, Adidas, and Coca-Cola — called on FIFA to reform in the wake of the arrests, even if they did not directly call for Blatter’s resignation. Meanwhile, the British government advised the football organization to undertake “a change in its leadership,” in a move completely backed by Prime Minister David Cameron. The English Football Association took a similarly dim view. “Sepp Blatter has to go,” chairman Gregg Dyke said, as quoted by The Guardian.

Blatter’s stubborn resilience in the face of such pressure, and his defiant victory Friday, may have knock-on consequences. UEFA (Union of European Football Associations) president Michel Platini hinted before the vote that European teams might boycott the Russian World Cup if Blatter won Friday’s vote, while UEFA and English Football Association board member David Gill pledged not to take up his role as vice-president of FIFA if Blatter won.

Who then, supported Blatter’s re-election in the secret ballot? The Confederation of African Football (representing 54 votes) had pledged to support Blatter, while the Asian Football Confederation (46 votes) had also placed their bets on the incumbent. South America’s 10 votes were all expected to go to Blatter, as were the majority of Oceania’s 11 votes and North and Central America and the Caribbean’s 35 votes. Russia’s Vladimir Putin has voiced strong support for Blatter. Blatter-dissenters, according to statements issued prior to the voting, included Australia, New Zealand, Canada, the U.S., and — of course — most of Europe.

In his opening address to FIFA’s congress Thursday, Blatter was circumspect. “I know many people hold me ultimately responsible for the actions and reputations of the global football community, whether it’s a decision for the hosting of a World Cup or a corruption scandal,” he said, according to The Guardian.

I cannot monitor everyone all of the time. If people want to do wrong, they will try to hide it. But it must fall to me to be ultimately responsible for the wellbeing of our organization and find a way forward to fix things.

Whether he’s good to his word, or becomes further entangled in the ongoing corruption probe, remains to be seen.