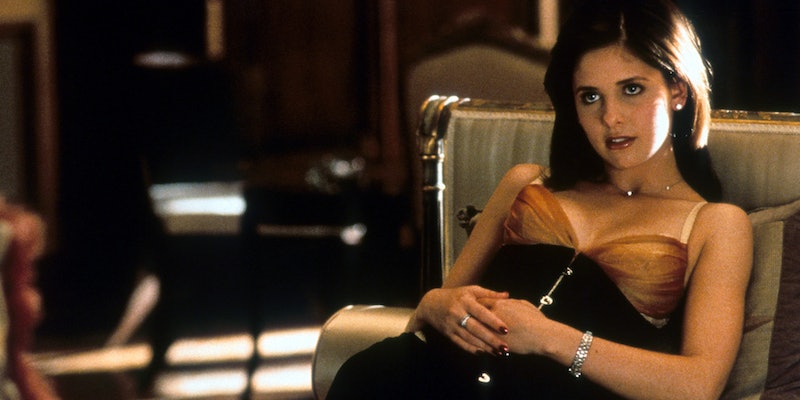 There are just some movies who get it so right the first time around that you wouldn't dare to try to match it with a sequel. Cruel Intentions should have been one of those movies. Though the film ended with the distressing death of Ryan Phillippe's character, it saw justice done against Sarah Michelle Gellar's character, who spent most of the movie trying hard to ruin his life, and the life of Reese Witherspoon's character. Of course, Hollywood did dignify Cruel Intentions with both two sequels-that-must-not-be-named and a musical — but don't count the musical out just yet. Apparently, Reese Witherspoon, Selma Blair, and Sarah Michelle Gellar had a Cruel Intentions reunion when the trio got together to watch the musical on Thursday, and it was everything that fans had been wanting and more.

Cruel Intentions, for those who have forgotten, tells the story of Sebastian (Phillippe), a cold, cruel prep kid who makes a bet with his stepsister, Kathryn (Gellar), that he can deflower and disgrace a famously pure new student, Annette (Witherspoon). If he wins, he gets to sleep with Kathryn. If Kathryn wins, she gets Sebastian's car. Meanwhile, Blair plays Cecile, a naive student Kathryn promises to take under her wing, but instead plots against for stealing her ex-boyfriend. (Or rather, plots against because her ex-boyfriend dumped her and began dating Cecile instead.) It's all very sordid, very dark, and very Gossip Girl-y, but with a twist that kept us hooked until the very last second.

Witherspoon and Blair would later reunite in 2001 to star in Legally Blonde together, so it comes as absolutely no surprise that the three women are still friends. In fact, according to an audience member who spoke to Us Weekly, their entire night was the cutest thing ever. "Reese was in the middle," the anonymous source reported. "They took iPhone pictures and it looked like they were debating which one was the cutest to post." Celebrities, you guys. They're just like us, except famous and making headlines for going places together 16 years after they costarred in a beloved cult classic together. You know, like normal people.

However, the night swiftly got even better. Not only did the three women allegedly get really, really super into lip synching along with Natalie Imbruglia's "Torn," but they also went backstage after the performance to congratulate the cast. The best way to do it? Blair and Gellar re-created the infamous onscreen kiss between Kathryn and Cecile that is one of the biggest moments most people remember about the film. (To me, the best part of this picture is actually Witherspoon's face. It looks like the stuff of Forever Alone memes.)

If there weren't already two sequels to Cruel Intentions that aren't worth discussing or even acknowledging, this would be the moment at which I begin clamoring for them to make one. Clearly the women still look upon the film with fondness, and even though Witherspoon and Phillippe had a rather awkward divorce in 2007, that shouldn't affect the film because they are both professionals and because, well, his character died. Making a Cruel Intentions sequel with all of the original characters would be the perfect gift for fans...or get accused by the new generation by being an adult remake of Gossip Girl, but in movie form. Either way, we'll all probably grab a ticket and head to the theater to check it out.

More like this
Sarah Michelle Gellar & Freddie Prinze Jr’s First Date Was Unexpected
By Maxine Harrison
'The Holiday' Director Just Addressed *Those* Sequel Rumours
By Sam Ramsden
These ‘Love Actually’ Plotlines Are “Out Of Date,” According To Director Richard Curtis
By Grace Wehniainen
This Iconic ‘Love Actually’ Scene Drove Alan Rickman “Insane”
By Grace Wehniainen
Get Even More From Bustle — Sign Up For The Newsletter