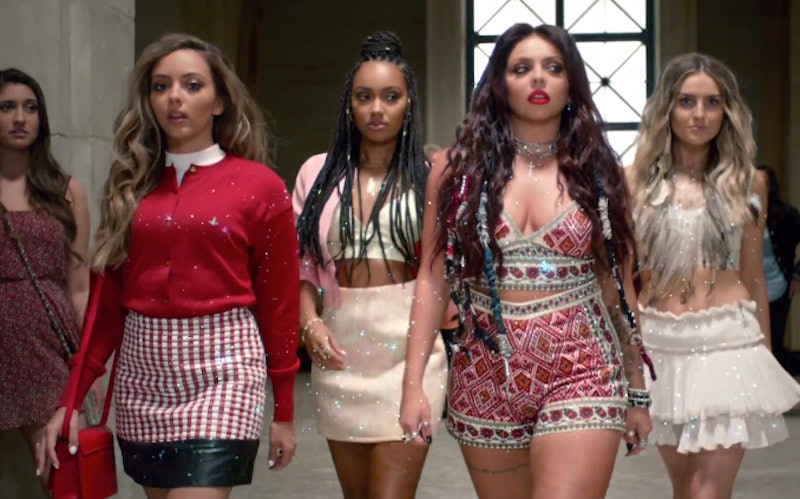 Wanna be hurled back to the '90s? Who doesn't, right? Well, Little Mix's "Black Magic" video will toss you back a few decades, thanks to all the '90s styles, from chokers to knee-high, Cher Horowitz socks. It's also totally inspired by two teen films of the era; that'd be the white magic comedy Teen Witch, which came out in 1989 (but that's as good as 1990), and the darker and gothier thriller The Craft.

The ladies of Little Mix spend the first half of the video in dowdy duds that hang off their frames and aren't super fashionable, and most of these threads haven't really managed to stay "classic" with the passage of time. Brown velour pants, Jade Thirlwall? I don't think so!

Leigh-Anne Pinnock does rock shell-top Adidas and those are timeless, but for the most part, the ladies of Little Mix get their cute '90s dork on, which sets the table for them to transform into stylish swans who get what they want, like what happens with Cher and Tai in Clueless, or Louise Miller in Teen Witch, or Fairuza Balk as Nancy and co. in The Craft.

Implications of the video theme aside, I've captured all the '90s styles, and some modern looks, too, from Little Mix's fun "Black Magic" video. BTW, here's fair warning. You will be singing the chorus long after you shut off the video.

2. A Better Look At Nerdy

You know revenge of the nerds is about to happen.

Their nemesis is so Britney Spears circa 1998, with the mix of sexy and athletic, thanks to the silver cropped top and flouncy skirt. But it's that choker that screams "1993!!" the loudest.

The pants and the vest... very '90s and very mismatched, but delightfully so.

A '90s concept and '90s looks. You know, some of these casual elements could work today if cleaned up a little...

Perrie Edwards' pink trainers have such a '90s Skechers energy.

Here's Leigh-Anne's aforementioned Adidas, which, when paired with jeans and a hoodie, aren't exactly throwback.

A denim vest over a white dress is so 1995. So is that floral romper. And that cropped top with high-waisted jeans. The only thing missing is a floral maxi dress with spaghetti straps and a white tee underneath paired with Doc Martens and brown lip liner.

After playing with magic, the ladies of Little Mix were transformed with very Clueless-like outfits. Jade's knee-high socks and Mary Janes with straps are so Cher. Pinnock's furry heels are reminiscent of Dionne, while Jesy Nelson's print outfit and dark hair remind me of Tai! Edwards' outfit could be a Cher ensemble, too.

Hello, '90s style. How I have missed you! Thanks to the Little Mix ladies for bringin' it back with a vengeance.

Watch the video below for the full "Black Magic" experience now that you've absorbed all of the fashions.