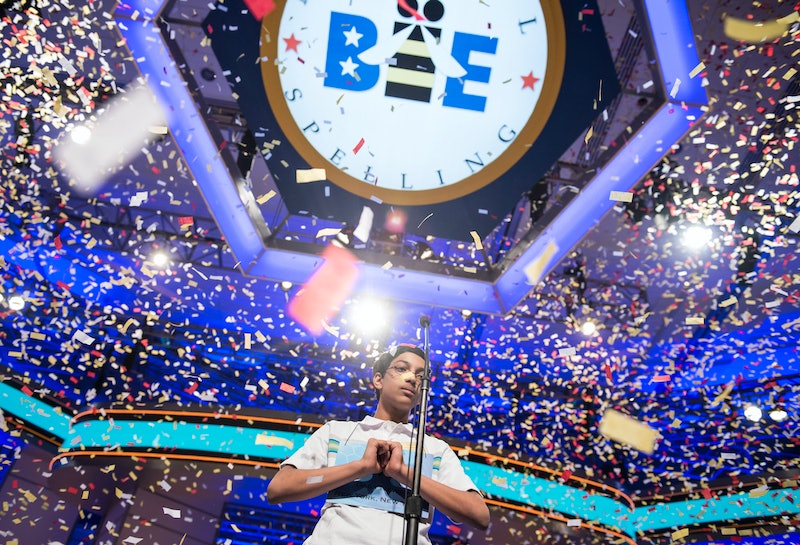 This year’s much anticipated, nerve-wracking Scripps Howard National Spelling Bee concluded Thursday night — after three grueling days — with the crowing of co-champions. Vanya Shivashankar, 13, and Gokul Venkatachalam, 14, concentrated their way to victory, successfully spelling “scherenschnitte” and “nunatak” respectively to secure their tie. An intimidating 285 spellers made it to the national finals, and only Shivashankar and Venkatachalam prevailed. The former, a Kansas-based winner of Lifetime's “Child Genius” quiz show, is a sibling of a former champion. The latter, dubbed “the cool one” by CNN, hails from Missouri and is a veteran of the competition — having placed third in 2014. Both are clearly super smart. But what does life post-Spelling Bee hold?

The Scripps National Spelling Bee has become a beloved American institution since its inception almost a century ago. In 1925, The Louisville Courier-Journal began the event with nine contestants. In 1941, the spelling bee branched out, and Scripps Howard took over the sponsorship of the competition. Suspended for several years due to America’s involvement in WWII (from 1943-45), the spelling bee has otherwise been going ever since. And the pay-off ain’t bad. This year’s substantial prizes included a $30,000 cash prize from Scripps, a $2,500 U.S. savings bond and reference library from Merriam-Webster, and $1,100 in reference works from Encyclopædia Britannica. With such riches and stores of knowledge, the world can surely be your oyster. What Shivashankar and Venkatachalam will do next is for them to decide. But what former champions have achieved might give some indication of what's in store.

The initial 1925 competition was won by Frank Neuhauser, who snagged his victory by correctly spelling the world “gladiolus.” For his precociousness, Neuhauser, who died in 2011, earned $500 in gold pieces, according to The New York Times. The Kentucky native went on to earn an engineering degree from the University of Louisville and a law degree from George Washington. He worked as a patent lawyer for first General Electric, then Washington firm Bernard Rothwell & Brown. He appeared in the 2002 documentary Spellbound and was an honored guest at several spelling bees late in his life.

The 1986 winner (with “odontalgia,” meaning toothache) is now a federal contractor in Washington working for “a minor agency” in the Department of Defense. Despite his personal struggle with bipolar disorder, which he was diagnosed with during university, Pennington recently told TIME that scandal doesn’t plague the lives of spelling stars. “There aren't any... living under bridges or cracking under the pressure,” he said. "I haven't heard any horror stories, like the cast of Diff'rent Strokes or child stars gone bad. They seem to be average people. The only thing that tends not to be average about them is they tend to be smart and have very large memories and usually have more degrees than the average person."

Petit triumphed in the 1987 competition, with her unsavory final spell being “staphylococci.” She went on to graduate first in her high school class before studying law. Now head of a small San Francisco law firm, she devotes her legal skills to nonprofits such as the Polly Klaas Foundation, Nature Conservancy, and MoveOn.org. She credits the spelling bee with teaching her key life lessons. “I learned about how you prepare yourself and then you have to let go. Luck is one factor in winning the bee, “ she told TIME. “Now, outside my job, I try not to engage in competitive activities.”

Ramachandran, champion of the 1988 bee having correctly spelled the word “elegiacal,” is still wrangling with unpronounceable words. A doctor and assistant professor at the University of California, San Francisco, she conducts research into “markers expressed by hepatocellular carcinoma versus tumors metastatic to the liver.”

Victor of the 1989 competition, with the excellent word “spoliator” (meaning “one who robs, plunders or despoils”), Isaacs has gone on to become perhaps the anti-spoliator — with a firm focus on constructive, holistic pursuits. Having graduated with degrees in Russian and environmental science, Isaacs now practices chiropractic and naturopathic medicine in Denver. Despite his achievements, Isaacs told TIME he still considers his spelling bee victory his top life experience. After all, “[h]ow many people can say they were number one in their field at one time in their life?”

Lai was only 12 when she triumphed in the 1996 competition with the ghoulish word “vivisepulture,” which refers to the act of burying someone alive. Now 31, and with economics and education degrees under her belt, she seems to have put aside the uber-competitive ethos required for the bee to focus on motherhood. She told ABC News she wasn’t sure whether either of her two sons (aged two and three) would go on to enter the competition. “My older son is just really into Ninja turtles right now, and they're both so young,” she said. “[W]e still have a while to go before seeing if they're interested in anything beyond Donatello and Michelangelo.”

One thing that seems to unite many of the former winners is an enduring devotion to the bee. Each year, former champions and competitors flock to the national finals, simply to bask in the rarefied, spelling-obsessed air of the spelling bee. Jacques Bailly, who won the 1980 competition with “elucubrate,” and went on to study Greek, German, French, Latin and Arabic, explained to The Washington Post last year: “It becomes part of your persona, this significant interest in words that keeps manifesting itself in your life… These kids are fellow intellectuals, and you want to help them. It’s fun.”

One former champion who bucks the trend with a less glowing review of the experience is Rebecca Sealfon, who won in 1997. Writing in The Daily Beast in 2012 she compared the bee to The Hunger Games . “Competitive spelling is a very American contest; Americans particularly enjoy watching winners win and losers lose,” she wrote. “[T]here’s no reason to pit such talented people against one another... the event would be just as entertaining if we celebrated all of our talents.”

But in other respects, Sealfon fits right in. Only 28, The Guardian reports that the former champion has already earned three degrees, works as a software engineer, and has started her own research venture.