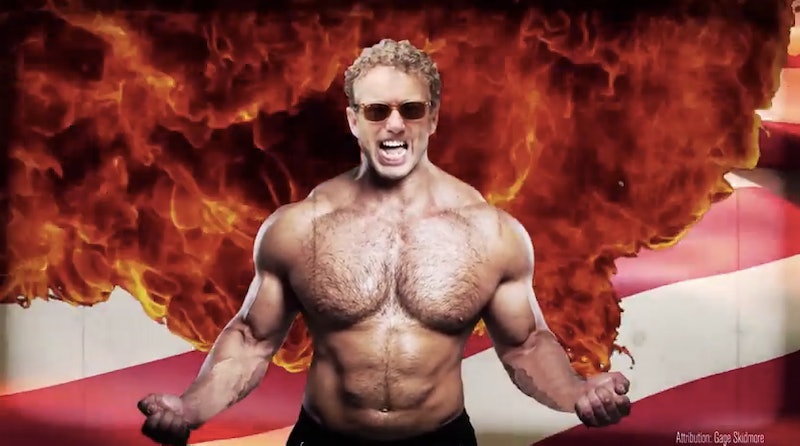 As presidential announcements pour in, there have been a lot of heartwarming (read: stale), all-American (read: boring) political ads for the U.S.'s 2016 saviors. But one presidential candidate has taken a stand against cookie-cutter ads and NSA spying. Sen. Rand Paul's Super PAC released an ad ahead of the Senate's rare Sunday session to discuss key parts of the Patriot Act that are set to expire. It has eagles breathing fire. It has a jacked Rand Paul. It has a moose. In short, it's perfect.

The ad, produced by America's Liberty PAC, is styled after a WWE match preview. The gravel-voiced announcer prompts:

If you were thinking that a bunch of Senators discussing the minutiae of phone-tapping regulations wouldn't be exciting as a wrestling match, you're probably right. But you can't tell by this ad. If Patriot Act talks are anything like it, then explosions and screaming bald eagles are going to drive C-SPAN to peak viewership this Sunday (Sunday, Sunday).

Some might say that having a "best moments" of a one-minute clip is gratuitous. Those people haven't seen this ad. A true "best of" for this ad would involve screenshot-ing every single nanosecond of this masterpiece. But I'm not going to do that today. Here are some of the most memorable moments of the ad that I'm going to watch again and again for the rest of my life.

When an eagle breathes fire

What we don't know is that this mutant eagle is the result of a chemical spill that enables it to belch fire, but is also destroying its intestines. But that doesn't matter BECAUSE FREEDOM.

The Defender of Freedom

Sen. Rand Paul is here to defend you from the Patriot Act and ensure that somehow all of those flames don't burn the American flag behind him. But he's also majorly 'roided up, so maybe don't do anything too crazy, OK?

When the ad introduces Paul's opponent, Obama the Email Reader, it shows him peaking over a laptop outfitted with stickers like a college freshman.

Is that John Kerry waterskiing? Interesting choice for a sticker. I would've gone with a Hillary 2016, but whatever.

The ad took digs at Paul's fellow Republicans who have backed Patriot Act. It was also the perfect opportunity to remind us that Ted Cruz is Canadian.

Here's a kid who is completely unaware of and/or affected by fire. How America is that?!

When the Capitol Dome exploded

...and an eagle came out of it

Seriously, y'all. Just watch the video.