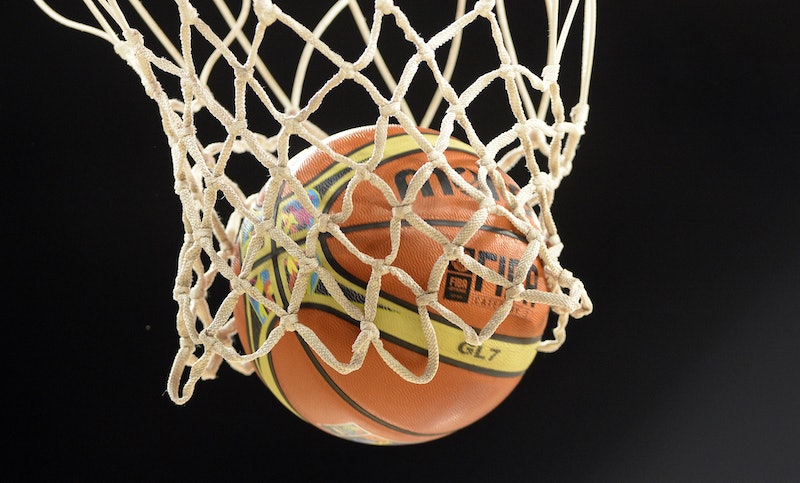 While some guys might try to pull off uber romantic Hollywood-worthy proposals, few are directly inspired by a movie that reflects the couple in question. Yesterday, one basketball player's surprise proposal took his girlfriend for a loop because it happened during a heated game of one-on-one — just like a real life Love & Basketball. If you remember that tearjerker of a movie, it basically follows two childhood friends who both pursue careers in the sport and end up falling in love. There's a tumultuous back a forth, an injury, and a happy ending, of course, which all plays out in National Basketball League star Superman Johnson's mid-court proposal to his girlfriend Brey Dorsett, a high-scoring baller herself.

While proposals at sporting events are nothing new, the sports proposal, where both parties in the pair participate in the sport, is a more recent thing. The Boston marathon proposal between two long-time lovers and runners comes to mind, because what better way to start a life together officially than in the midst of doing something you both are passionate about? Kudos to Johnson and Dorsett for taking one-on-one to the next level. Here's a breakdown of what actually went down.

It all starts simply enough, just a friendly match between boyfriend and girlfriend.

Somehow, on his way to the basket, Superman trips and takes a dramatic fall.

While he's seemingly down for the count, Johnson's teammates run over to help, but instead stealthily pass him the ring box. He palms it, slowly gets up, and presents it to a very shocked Dorsett.

They embrace and begin to celebrate, but not before Dorsett reminds Johnson that it was her ball, after all, and let's not forget what the most important thing of all is — there's a match to finish.