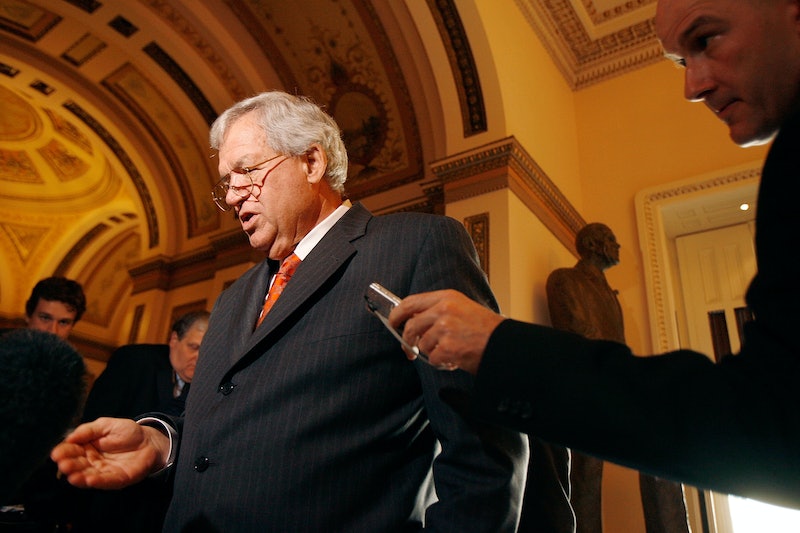 A federal law enforcement source on Friday revealed to The Los Angeles Times that former House Speaker Dennis Hastert, previously a teacher in Yorkville, Illinois, had allegedly been involved in a plot to silence a former student from speaking out about charges of sexual misconduct. According to the anonymous source, Haster supposedly paid out $3.5 million to keep the student from going to the police. On Thursday, court officials unsealed a February 2014 federal grand jury indictment, which charged that Hastert had allegedly violated several banking laws in order to withdraw the funds and that he had later lied about it to investigators.

According to the source, the unnamed man behind the allegations told authorities that Hastert had touched him inappropriately during his tenure as a wrestling coach and teacher at the Yorkville high school from 1965 to 1981. He did not specify any additional details of their relationship beyond the charges of sexual misconduct. Investigators have so far been unable to substantiate the man’s claims beyond his own testimony.

"It has nothing to do with public corruption or a corruption scandal, or his time in office," the anonymous source told several media outlets on Friday. "[The alleged incident] occurred years earlier."

Hastert, a longtime Republican from Illinois, served as Speaker of the House between 1999 and 2007, and has since functioned as a highly-paid lobbyist on the Hill, working to advance legislation for several major tobacco and energy firms. In the unsealed court documents on Thursday, federal investigators claimed that the former Speaker had lied to authorities about what he was doing with the funds — some of which totaled over $10,000 per withdrawal.

"In response to the agents’ question confirming whether the purpose of the withdrawals was to store cash because he did not feel safe with the banking system, as he previously indicated," wrote authorities in their initial February 2014 indictment, "[Hastert] stated: 'Yeah ... I kept the cash. That’s what I’m doing.'"

The allegations of sexual abuse were undated, according to court papers, and the indictment did not specify how far the misconduct had proceeded. But the anonymous source claimed that "it was sex."

"During … 2010 meetings and subsequent discussions, defendant [Hastert] agreed to provide Individual A (the alleged victim) $3.5 million in order to compensate for and conceal his prior misconduct against Individual A," wrote court officials.

On Friday, BuzzFeed News reported that a source close to the case had claimed there was a second victim.

"Investigators considered including a second alleged victim in the Hastert indictment, but ultimately chose not to do so," said the supposed source, according to BuzzFeed.

A report by The New York Times claimed that school officials where Hastert had worked were unaware of any "alleged misconduct" involved with the case.

"Yorkville Community Unit School District # 115 has no knowledge of Mr. Hastert’s alleged misconduct, nor has any individual contacted the District to report any such misconduct," said the school in a statement on Friday. "If requested to do so, the District plans to cooperate fully with the U.S. Attorney’s investigation into this matter."

The scandal has since rocked the political landscape, with The New York Times reporting that some members of Congress were surprised by the contents of the unsealed documents on Thursday and by Friday’s added allegations of abuse.

"I think we are all shocked by this," said former Rep. Tom Davis (R-Va.) in a statement to the paper. "In my dealings with Denny, he was always straight up, aboveboard and never even close to crossing the line on anything."

In a weekly conference on Friday, White House Press Secretary Josh Earnest told reporters that President Obama would stand behind all efforts to increase accountability and transparency in the public sector.

"They have an important job to do and [the president] expects them to do it," said Earnest.