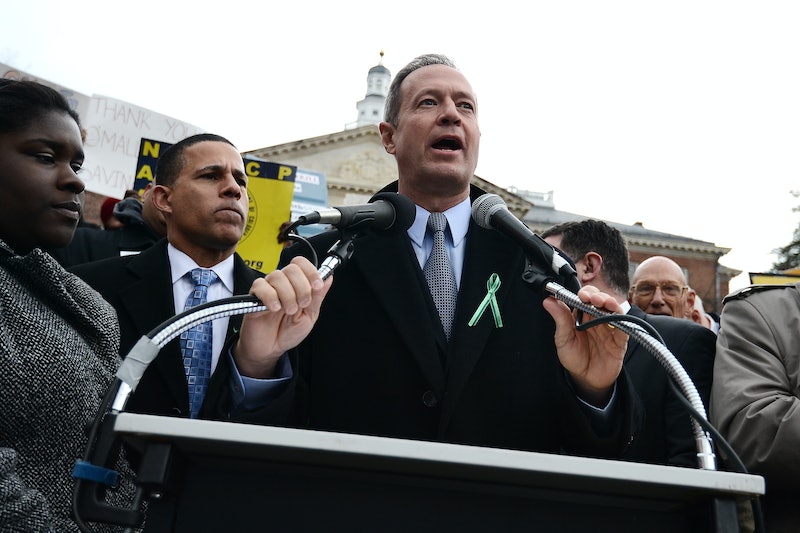 Amid the chaos of a crowded 2016 White House field, former Maryland Gov. Martin O'Malley has made his bid — but it will come with a price tag. As momentum ramped up at O'Malley's Baltimore headquarters near Penn Station, opposition has already emerged. And with his official announcement on Saturday, a group of angry protesters followed O'Malley to Federal Hill Park to voice their frustration with his previous "zero-tolerance" crime policies and perceived allowance of police brutality.

"All you have to do is look at a local blog and see that he’s not very well liked — not by the locals for sure," local Baltimore resident Tom Gregory, a retired college professor and commercial photographer, told the International Business Times on Saturday. Gregory said he had considered heading over to the announcement simply to watch the protests in action.

O'Malley's harshest critics have alleged that his tough-on-crime stances led to the death of 25-year-old Freddie Gray, who died after suffering neck and spinal cord injuries while in Baltimore Police custody. O'Malley has pushed back in recent weeks, claiming that the city was safer now than before he took the mayor's office in 1999. In the run-up to his announcement on Saturday, O'Malley defended his tenure, telling The Baltimore Sun that, with the approval of local organizers, he had cleaned up the worst of the crime to protect innocent civilians.

His statements weren't enough to quell the outrage that cropped up on the fringes of Saturday's presidential announcement. Carrying signs that read "Killer," and the less aggressive, but equally impassioned, "Black Lives Matter," protesters on Saturday attempted to disrupt O'Malley's official announcement, gathering in a police-cordoned zone separate from O'Malley's supporters. According to the IBTimes, a few began chanting, "You are lying," and blowing whistles repeatedly.

Witnesses claimed that several protesters had been pulled from the scene by security guards. A scuffle between two men also broke out but was resolved peacefully, reported one Twitter user.

As the city of Baltimore regains its balance in the wake of riots and a sharp 50 percent increase in violent crime since the beginning of May, according to city officials (police reported on Friday that a man fatally shot in West Baltimore was the city's 39th this month), O'Malley's critics have spoken out against what they call an "opportunistic" move by the former governor, who visited the embattled city shortly following Gray's death in April. With a trail of reporters around him, O'Malley called the city of Baltimore resilient, indicating that they had seen far worse and would be able to weather the tragedy together. Supporters fawned. Rivals were not so kind.

"I think he’s long aspired to higher office and everything he did was about that, rather than about Baltimore or the state of Maryland," suggested protester Dominque Stevenson, 50, in comments to reporters following O'Malley's visit last month. "I think it’s great that people are going to ... call him out on those issues."

O'Malley, a Democrat and former Baltimore mayor, has polled at around 1 to 4 percent in previous surveys, typically behind front-runner Hillary Clinton and Vermont Sen. Bernie Sanders. Although his supporters have touted him as an education champion and the only viable alternative to Clinton's establishment presence, his detractors have held to a more antagonistic view of his tenure as governor.