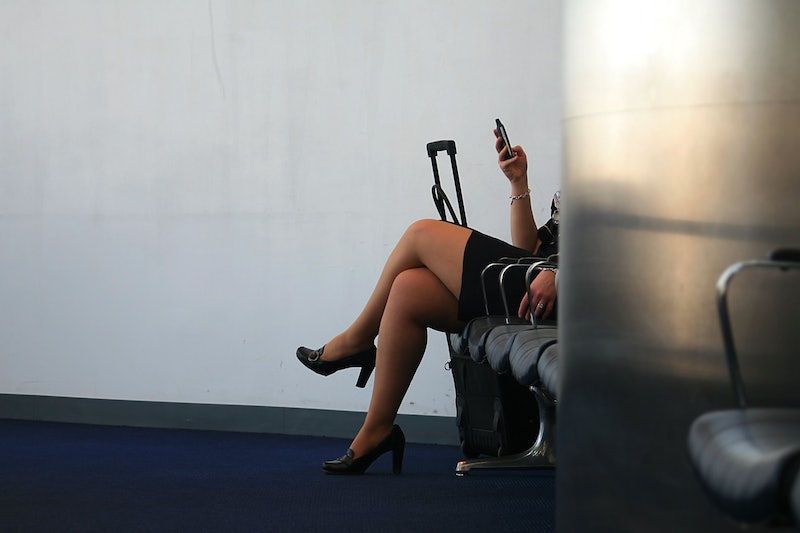 From getting to the airport on time, to making sure you don't have liquids over two ounces, to the great unknown of who will be sitting next to you on the plane, flying is not always the most luxurious experience (unless, of course, you're flying in a private jet or first class). But you may not even have to upgrade in order to get a more comfortable experience, according to these flight attendants of Reddit who've revealed secret perks most passengers don't know about. Now I almost wish I had a flight scheduled sometime in the near future, so I could try one or all of these out. Almost, but not quite.

Probably the most shocking travel hack I ever learned is that you are allowed to carry mini bottles of liquor onto a plane (as long as you're of the legal drinking age, obviously). I may never put it to use because getting drunk on a plane sounds like you're just asking for the worst hangover ever, but it's still good to know. Another semi-useful liquid-related travel hack: you may be able to bring frozen liquid in your carry on, apparently, as long as it's literally frozen solid. Not sure I would want all that ice melting all over my stuff at the gate, but if anybody can confirm this actually works, I would love to know.

Here are my 5 favorite travel hacks from the Reddit thread, which you can read in its entirety here.

1. One way to beat the competitor's prices

Okay, so this one isn't from a flight attendant per se, but I still find it funny even though I'm not sure I would recommend it — pissing off the crew probably isn't the best way to start out your journey. But, I mean, do they really expect us to pretend like we never fly any other airlines?

I HAVE TO KNOW WHAT AIRLINE THIS IS. What fancy-pants airline has the capability to steam milk, let alone carry actual milk? Whichever one you are, I will hunt you down, I will find you, and I will drink your gourmet coffee.

3. In case you need wiggle room

Okay, this is game-changing right here. It's just a hassle to move my soda, perch it precariously on my seat, stash my book somewhere, and put up my tray table every time I have to go to the bathroom. Why did nobody tell me until now that there was an easier way?!

4. Seriously, everybody should do this

Can confirm, I gate check all the time — that way I don't have to struggle with lifting my heavy bag into the overhead bin. I also don't have to worry I'll forget my stuff on the plane. It's a win-win. Seriously, I don't understand why more people don't volunteer to do this.

5. Not a hack but definitely something we should all do anyway

Truth be told, there probably aren't many "magic secrets" to flying (and I assume one of the reasons this thread was rife with more Mile High Club jokes than actual tips), because the flight attendants' job is to get you from point A to point B safely, not to give you a bunch of free stuff.