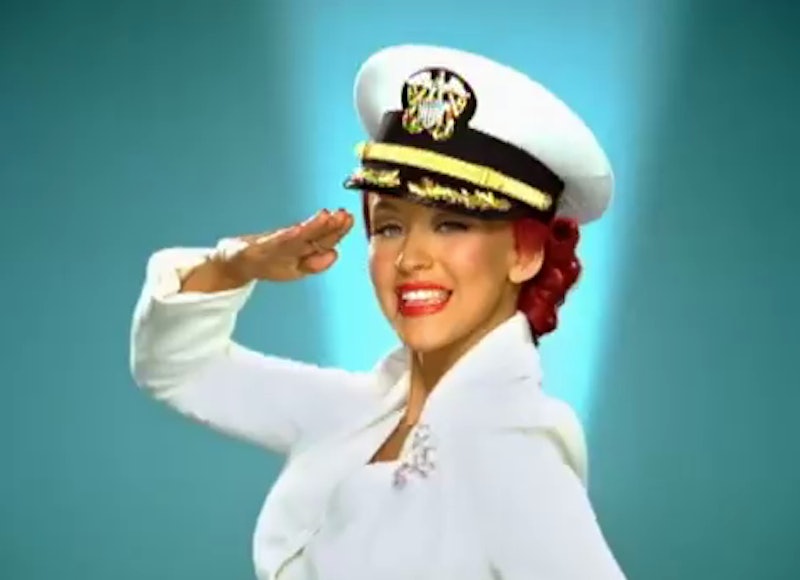 Prepare yourselves for a two-in-one throwback moment in the form of Christina Aguilera’s “Candyman” music video. Although it’s been nearly a decade since Aguilera shot the jazzy, upbeat visuals to the Back to Basics track, it’s still a pretty impressive artistic effort that could easily hold its own amongst some of today’s most popular music videos. Directed by Matthew Rolston (Aguilera took on co-directing duties), the vivid “Candyman” video was inspired by the World War II era, so you know what means: soldiers, pin-up girl references, and old school dancing galore. However, we all know it wouldn’t be a classic Aguilera production without some major sex appeal — and, trust me, “Candyman” certainly doesn’t fail to deliver.

In fact, the video was so infectious that it earned a 2007 MTV Video Music Award nomination for “Best Direction.” If that’s not a sign of some serious pop culture cred then consider this: Glee covered “Candyman” in Season 3. If Glee puts its spin on a song, pop star should take that as an official sign their track is legendary.

Anyway, from what I recall about the video, it was full of color, attitude and throngs of eager uniformed men a-rootin’ and a-tootin’. But, before I allow visions of handsome soldiers to totally blur my vision, here are eight moments from “Candyman” that you probably forgot about:

Did anyone else totally forget about this? The red, blonde, and brunette versions of Aguilera made for one of the hottest trios ever.

Specifically, that one guy in the middle is seriously enthusiastic — but with three versions of Aguilera shimmying on stage, I gotta say, his reaction is perfectly understandable.

So You Think You Can Dance Winner Benji Scwhimmer

In 2006, Schwimmer's superb dancing talent paid off when he won Season 2 of SYTYCD. Aguilera typically sticks to sexier choreography, but Scwhimmer's "Candyman" cameo obviously challenged her to take her skills to another level. Which leads me to...

The video features one impressive dance feat after another. (In other words, don't try these moves at home unless you're a professional!)

The Nod To Rosie The Riveter

Props to Aguilera for her modernized take on such an iconic feminist image.

This Symmetrical March Inside An Airplane Hangar

Between the soldiers' symmetrical marching, the vintage aircraft, and the hangar as a backdrop, everything about this scene is absolute perfection.

Work it, girl. As usual, her strut is at the maximum level of fierceness.

I can't think of better way to end a video than being hoisted on the shoulders of a few good soldier men. Job well done, Aguilera — as always.