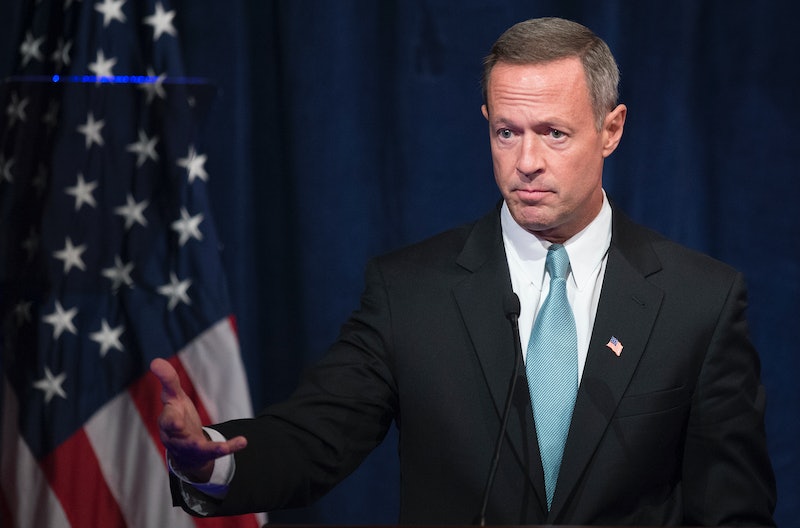 The Democratic presidential field in 2016 got a little bit larger on Saturday, as former Maryland governor and slick-fingered guitarist Martin O'Malley officially announced his candidacy. At 52, O'Malley is now the youngest Democrat in the race and remains a relative unknown on the national stage. But there's one way that dedicated HBO fans might recognize his name — is Martin O'Malley actually Tommy Carcetti from The Wire ?

First off, yes, there will be spoilers about The Wire below. So, if you haven't watched the series, consider doing so! The Wire ran for five seasons, from 2002 to 2008, and its depiction of the city of Baltimore and its myriad institutional crises made it widely regarded as one of the greatest TV shows of all time. And O'Malley has been popularly cited as the inspiration for one of the show's most pivotal, and most ultimately depressing characters — young mayor of Baltimore and eventual Maryland Gov. Tommy Carcetti, played by Aiden Gillen.

It's an association that O'Malley despises, by all accounts — according to the Washington Post, it's understood among his aides that The Wire is not a topic for discussion. This isn't entirely surprising, given the dubious moral and political arc the Carcetti character follows. But is it really fair to say that O'Malley and Carcetti are all that alike?

There are also obvious, entirely understandable reasons that O'Malley doesn't appreciate the comparison, though. The view that The Wire gives of Tommy Carcetti is often very unflattering. Some of the lowlights:

Of course, if you're into authorial intent as a way of determining these things, then the question is a lot easier to answer — according to David Simon, The Wire's creator, the Carcetti character is a composite based on many political figures he observed while working as a reporter for The Baltimore Sun. And moreover, Simon doesn't consider Carcetti beyond sympathy, as he expressed to The Daily Beast in 2013.

The writing was not unsympathetic to a man who comes in with the idea of changing things and emerges a completely different creature. That was the story [of Tommy Carcetti] and that is the story of Marty O’Malley.

For what it's worth, it's not as though the two are mortal enemies, in spite of their pretty heated disagreements (in particular about the state of policing in Baltimore). Even though O'Malley would probably be a lot happier if The Wire had never existed, he's apparently not too surly to have a beer with Simon, as the writer detailed in a 2014 blog post. It also answers another helpful question about O'Malley — if you're buying him a beer, Corona is a safe bet.

More like this
At 28, Tisha Campbell Was Newly Married & Dancing Through A Career Pivot
By Grace Wehniainen
'It’s A Sin's Real-Life Jill Has An Important Message About Monkeypox
By Sam Ramsden
Steve Martin Hints That He May Retire After 'Only Murders In The Building'
By Jake Viswanath
This 'Sex Education' S4 Update Is Everything You Were Hoping For
By Bustle UK
Get Even More From Bustle — Sign Up For The Newsletter