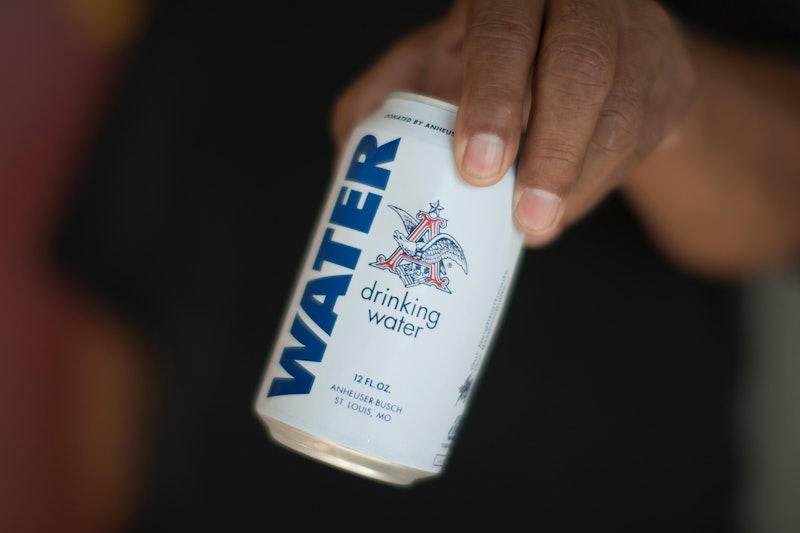 In the wake of the devastating floods in Texas and Oklahoma, Anheuser-Busch has halted its beer production to provide cans of drinking water to affected communities. NBC News reported that one of the company's 12 breweries stopped its beer production Wednesday night, instead manufacturing 50,000 cans of water. Those cans have been donated to the American Red Cross, which will distribute them to affected residents in Texas and Oklahoma.

"Right now our production line is running emergency drinking water instead of beer," Rob Haas, who manages the brewery in Cartersville, Georgia, told NBC News. He added that producing these cans of water is "something we're uniquely positioned to do in a very timely period."

According to the American Red Cross, just 2,000 cans of water have been shipped to the impacted area so far this week. Jordan Scott, a Red Cross spokesperson, said the organization is working with Anheuser-Busch to figure out the best distribution methods and the areas most in need. Scott added to NBC News that Oklahoma and Texas were in an "unprecedented" situation after days of heavy rain triggered dangerous flash floods, stranding hundreds in their cars and claiming the lives of at least 28 people in Texas and Oklahoma.

The Anheuser-Busch Foundation states it has donated more than $515 million to charitable organizations over the last two decades. But it's not just about the money, of course: Anheuser-Busch says it has provided more than 70 million cans of clean drinking water to people in need of relief following natural disasters since 1988. Between 2012 and 2013 alone, the company has distributed nearly 2 million cans of water to 10 US states impacted by storms, hurricanes, wildfires and tornadoes.

Haas told NBC News that the company's Georgia brewery produces cans of clean drinking water several times a year following natural disasters. Of this particular crisis unfolding in Texas and Oklahoma, Scott, of the American Red Cross, added to the news source: "There are a lot of folks in need and everyone's coming forward to help out."