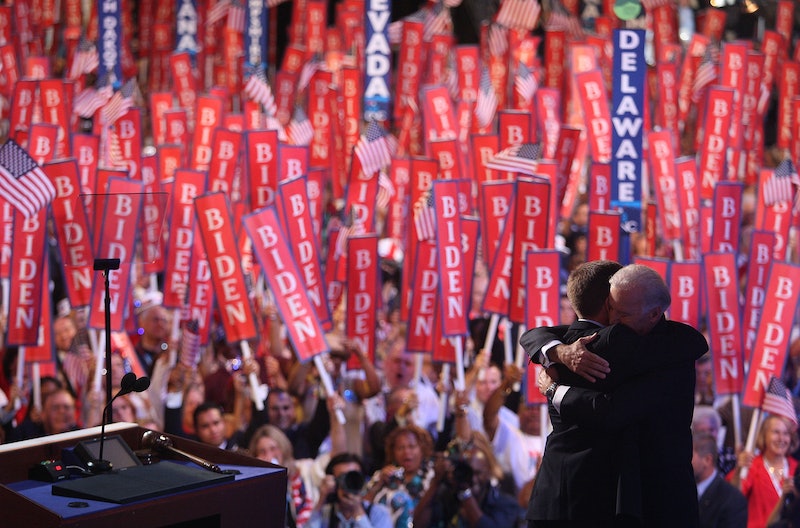 The eldest son of Vice President Joe Biden, Beau Biden, died Saturday night at the age of 46 after a long battle with brain cancer. Just like his father, Beau was a Pretty Big Deal around Delaware, serving as the state's attorney general, as well as a major in the Delaware National Guard. And just like his father, Beau didn't become a household name until the 2008 Democratic National Convention, where he delivered a moving tribute to his father and the tragedy they both shared in 1972.

More than 40 years ago, just weeks after Joe was elected to the US Senate, his first wife, Neilla, and his daughter, Naomi Christina, were killed in a car accident on the way home from buying the family Christmas tree. Beau and his younger brother were riding in the vehicle at the time of the crash and were hospitalized with serious injuries.

A grieving Joe returned to Delaware to care for his two injured children and considered resigning from his brand-new position because of the tragedy. In the end, he decided to continue on as a US Senator and was sworn in at the hospital chapel, right beside Beau's wheelchair.

Unlike most politicians in Congress, who tend to split time between Washington, DC, and their home states, Joe made the round-trip journey between Delaware and Washington each day — the origins of his nickname "Amtrak Joe" — continuing his duties as a single parent. This has become the defining story of Joe's life and career, and it was brought to national attention in a heartfelt speech by Beau.

The young attorney general said in 2008:

The truth is, he almost wasn't a senator at all. ... I was just short of four years old. One of my earliest memories was being in that hospital, my dad always at our side. We — my brother and I, not the Senate — were all that we cared about. He decided not to take the oath of office. He said then: Delaware can get another senator, but my boys can't get another father.

"As a single parent, he decided to be there. To put us to bed. To be there when we woke up from a bad dream," Beau added. "So he traveled, four hours a day. ... Thirty-six years later, he still makes that trip."

In a statement Saturday night, Joe described his son of having "integrity, courage and strength" that he demonstrated "every day of life." The Biden family added: "Beau Biden was, quite simply, the finest man any of us have ever known."

You can watch the full video of Beau Biden's moving 2008 DNC speech below.