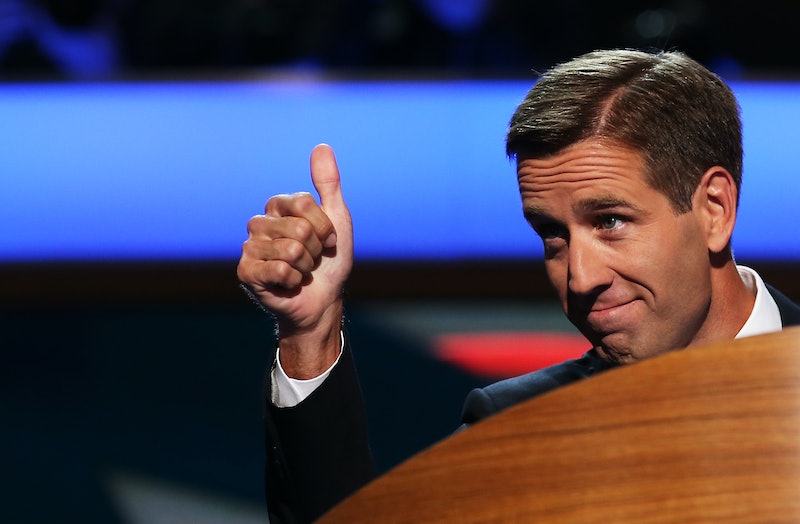 Vice President Joe Biden announced Saturday the tragic news that his eldest son, known as Beau Biden, had passed away. The younger Biden, whose full name was Joseph R. Biden III, was 46 and a former attorney general of Delaware. His death was due to brain cancer, with which Beau had first been diagnosed in 2013. Joe Biden’s poignant statement on behalf of the bereaved Biden clan eloquently honors Beau Biden’s character and accomplishments. “Beau's life was defined by service to others,” the statement read, before adding: “More than his professional accomplishments, Beau measured himself as a husband, father, son and brother.” Beau Biden lived a full life, despite its untimely end, and his achievements — both professional and personal — were many.

The messages of condolence and support that have continued to flow since Biden’s announcement is testament to Beau’s impact: as Delaware’s attorney general, as a soldier, and as a friend. An early statement from President Barack Obama honored Beau’s legacy, calling him “a deeply faithful man, who made a difference in the lives of all he touched.” Senator Harry Reid called Beau a “wonderful, strong and courageous man” in a statement posted to Twitter, while political consultant David Axelrod had similarly admiring words for the deceased — deeming him a “Great husband, father, son, veteran and public servant.”

Beau was clearly much loved, and his dedication earned him personal and professional triumphs. Here’s a look back at a few of them:

Hardly an “achievement” per se, but Beau Biden overcame adversity early on, when he survived the car crash that killed his mother and sister. Joe Biden’s first wife Neilia, and his 13-month-old daughter, Naomi, were both killed when their car was struck by a tractor-trailer in 1972. Beau Biden, only two at the time, and his younger brother Hunter were both in the family station wagon during the crash, but survived — despite suffering life-threatening injuries. Joe Biden was sworn in to the Senate a month after the accident; the ceremony took place in the hospital, at Beau’s bedside.

Having studied law at Syracuse University, Beau joined the Delaware National Guard in 2003. He served as a major in the Judge Advocate General’s Corps, and was deployed to Iraq in 2008. Beau received the Bronze Star for his service, a military medal that celebrates “heroic or meritorious achievement.” During his year of service in Iraq, Beau returned home only once — to see his father take the oath of office for vice president.

Beau delivered an emotional address to introduce his father at the 2008 Democratic National Convention in Denver. The speech paid tribute to Joe Biden as “an incredible father and a loving grandfather,” and beseeched the crowd to “be there” for Biden and Obama as they forged America’s future in their new administration. That stirring speech also, as The Washington Post notes, put Beau on the national map as a rising political star.

Beau served as a prosecutor in the US attorney's office in Philadelphia for nine years, and a legal adviser to the US Department of Justice in post-war Kosovo in 2001 — where he helped to train judges and prosecutors. He was elected attorney general of Delaware in 2006. Although his first term was interrupted by his military service, he went on to be re-elected in 2010 with an even greater share of votes. While in office, Beau uncompromisingly pursued child sex crime perpetrators, managing to push through 180 convictions. He also put pressure on the banking sector and mortgage lenders for their involvement in the unregulated loaning that precipitated the financial crisis.

Early Victories In His Battle With Cancer

In 2010, Beau suffered a mild stroke. Then, three years later, he experienced disorientation and weakness and was admitted to the University of Texas M.D. Anderson Cancer Center in Houston, where he underwent surgery to have a small lesion removed from his brain. By November 2013, after radiation treatment and chemotherapy, Beau was given a clean bill of health. Unfortunately, he suffered a recurrence this spring, and was admitted to hospital in May.

“More than his professional accomplishments, Beau measured himself as a husband, father, son and brother,” Joe Biden’s statement Saturday read. “His absolute honor made him a role model for our family. Beau embodied my father’s saying that a parent knows success when his child turns out better than he did.” Beau is survived by his wife, Hallie, and their two children, Natalie, 11, and Hunter, 9. His brother, Hunter, and his sister, Ashley, also survive him, along with his father and stepmother. Obama paid tribute to Beau’s devotion to his family. “For all that Beau Biden achieved in his life, nothing made him prouder, nothing made him happier, nothing claimed a fuller focus of his love and devotion than his family,” Obama said. “Just like his dad.”