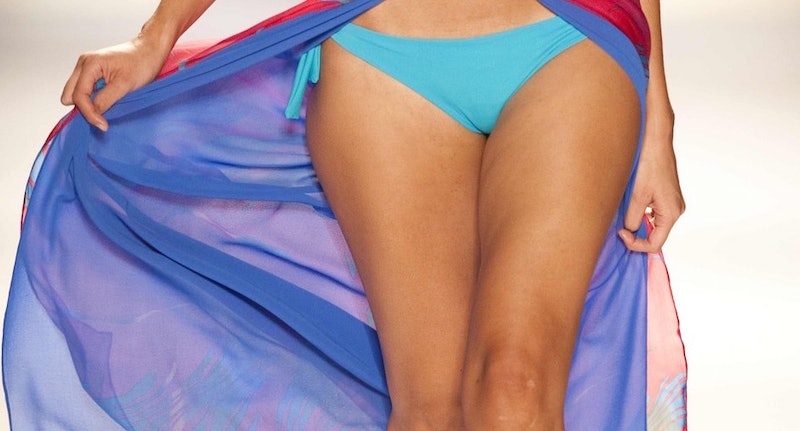 Remember when skillfully crafting pubic hair into letters and shapes was, like, a normal thing that women's magazines were trying to convince us all to do? Thankfully for me and for my waxer's poor fingers, more natural styles have since come into favor, and in recent years, the full bush is back in a big way. The "Full Brazilian" is even being called the bikini wax trend of 2015. You may, of course, be asking, "Why call it a 'wax' trend, though? Isn't the point of a full bush to just let it all fly free?"

Not so much. Just because more people with vulvas are into keeping things a bit more hairy, it doesn't mean that all of a sudden bikini lines themselves are sporting some extra fuzz. The "Full Brazilian" is sort of a compromise between an "all-natural" style and some light hair removal.

Whether for reasons of comfort or preference, the style removes hair from the bikini line and the butt flap (the technical term, BTW), while leaving pretty much everything else well enough alone. Although some people may choose to take a little off the top or also wax their labia, it's a pretty simple and straightforward job that's also lighter on pain than your typical Brazilian.

While I'm always a fan of trends that allow people to feel a little more comfortable with their body the way it is — and have been getting my spa's version of this, "the in-betweenie," for years — it's important to be chill about other people's own choices for their own bodies.

Just like it was silly to pressure people into getting everything waxed off, it would be ridiculous to then shame those who decided they prefer a smooth, shiny vag just because a full bush is "on trend." Whatever you decide to do or not do to your own genitals is your business, capisce?