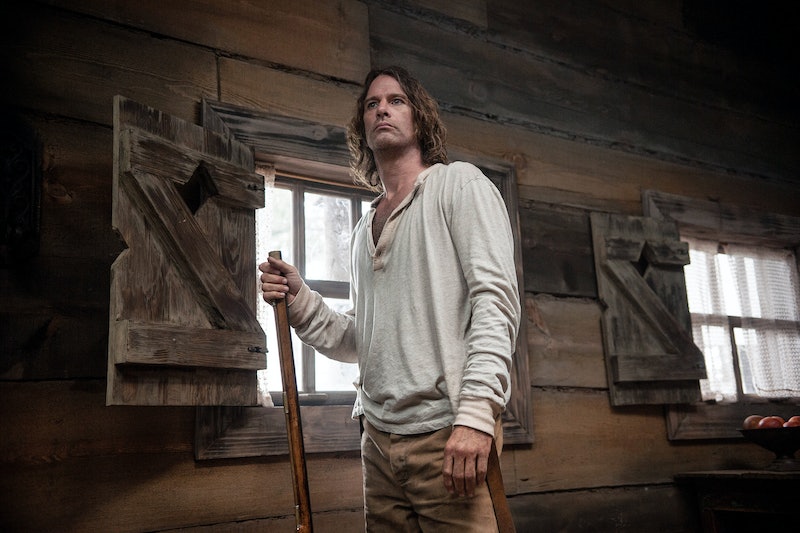 History Channel's new miniseries Texas Rising tells the story of the Texas Revolution through the eyes of over a dozen characters. And Thomas Jane is playing James Wykoff, a homesteader who finds his family right in the middle of the Texan-Mexican conflict. But James Wyckoff is not based on a real American, unlike many of the other characters. While people like Santa Anna and Sam Houston are lifted right out of history books onto the screen, others, like Emily West, became venerated tall tales, famous across the American West. But plenty of citizens in the Texas territory were just living there, unencumbered by historical importance. So History Channel created the Wykoff family and put them in jeopardy. Even though all James wanted was to build a home for his family, he winds up "in hostile Indian territory," according to History's summary of the character.

Adding characters like Wykoff adds to the street-level story of the Texas Revolution, which roped in more than just the Rangers. By adding James, his wife Pauline, and their children, it gives a sense of family to the story, which is largely absent given the cast is mostly made up of single men (or women). The man who sells Wykoff his land is also an original character who helps fill out the storyline. Without Empresario Buckley, Wykoff might have never even bought that claim. But Buckley is such a huckster that he stands in for all the crooked landlords and snake oil salesmen that ran wild in the west before the land was regulated by the American government.

The Wykoffs remind me of the Ingalls family from the Little House of the Prairie series. As the Ingalls moved west, they encountered more resistance and even threats from Native Americans (just like the Wykoffs, actually), and moved farther and farther away from the establishment that would have protected them just because they were white American citizens. And just like the Ingalls, the Wykoffs will hopefully survive, but not without learning that they don't inherently have more rights to the Texan land than the Comanches or Mexicans do.

So even if Wykoff and his family aren't real parts of American history, that doesn't mean that the homestead movement didn't really happen. And without characters like Wykoff and his family, the stories of the Texas Rangers wouldn't seem as meaningful — because these are the people they were trying to protect, even while they were taking land from the Comanche Indians. Those people eventually became the citizens of Texas once it became the American state, and Texas Rising has an opportunity to show just what it was like out on the homestead. So far, it seems pretty harrowing, but there are three weeks left for things to turn around for the Wykoffs.