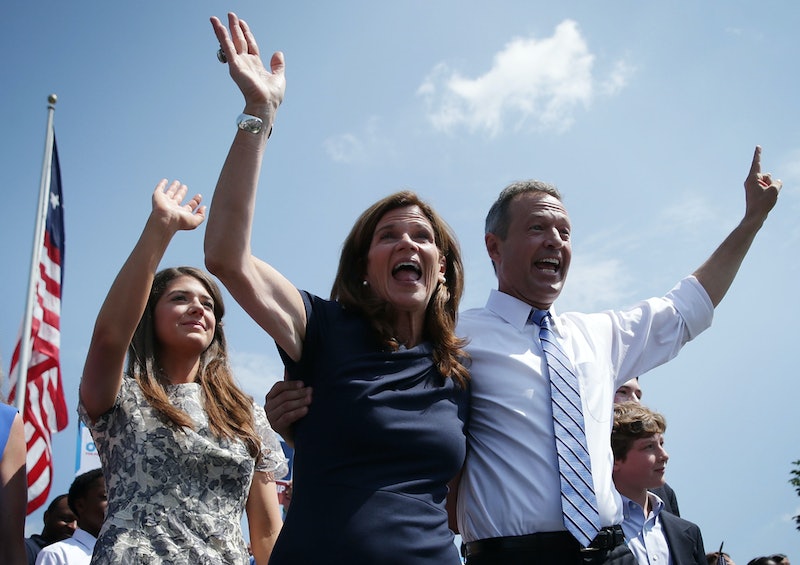 Now that her husband, former Maryland Gov. Martin O'Malley has announced he's running for president, one might expect to see Catherine "Katie" Curran O'Malley on the campaign trail showing her support. Indeed, during his campaign announcement in Baltimore, the O'Malleys held hands onstage, looking every bit the confident political couple. But since she's an accomplished District Court judge in Baltimore, Martin O'Malley's wife, Katie O'Malley, is bound by a judicial code of conduct that bars judges from participating in partisan political activity, according to The Baltimore Sun.

It's somewhat ironic, since the couple met on a campaign trail back in 1986. He was part of Barbara Mikulski's Senate campaign that year, and she was supporting her father, J. Joseph Curran, who was running for Maryland attorney general, according to a 2006 Washington Post profile of the couple (Both candidates in those 1986 races, it's worth noting, were elected, with Mikulski recently announcing her plans not to run for another term in 2016). The O'Malleys didn't start dating until nearly three years later, and were married in 1990. The couple have four children, who helped out with their dad's campaign for governor, according to the Post.

But just because she can't stump for her husband at campaign events doesn't mean O'Malley is unwilling to take a stand on issues. She started an anti-bullying campaign in Maryland in 2011, and according to the Sun, she works with other judges on best practices for handling domestic violence cases.

O'Malley also has been an outspoken supporter of same-sex marriage legislation, with some of her remarks getting her in hot water in 2012, according to the Associated Press. At a gay-rights conference in Baltimore, she said the reason a 2011 bill to legalize same-sex marriage in Maryland had failed was due to "some cowards that prevented it from passing." O'Malley later apologized for the comments.

Whether or not O'Malley would keep her job as judge if Martin is elected is not entirely clear. In a 2013 Sun profile of her, O'Malley said she was staying focused on her job and raising the couple's four children. Her husband was still governor at the time. She had not thought ahead to the idea of becoming First Lady if Martin should be elected to the White House, she said at the time. "I can't really project that far ahead because if I did, my head would spin," she said.