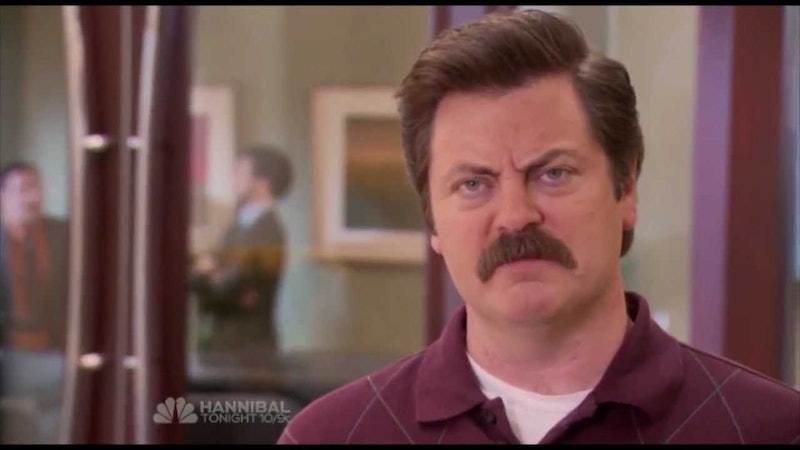 Many of us can say that we have experienced a hangover at some point in our lives thus far. And, OK, some of us can say we have experienced them a lot more than others. But, regardless of the frequency in which your body revolts against your alcohol intake, I think we can all agree on one thing: we are not happy campers when we are in the midst of one. In fact, often times, we become grumpy, impatient, reluctant, and stubborn versions of ourselves because of our self-inflicted, alcohol induced illnesses. Basically, we become just like Parks and Recreation’s lovable yet irritable Ron Swanson.

Listen, I truly, unabashedly love Ron Swanson, and so I can say this with the utmost sincerity: being like him is not a bad thing, it’s a necessary thing. Because, taking on his aloof persona is basically just a defense mechanism against all of the evils that can plague you while your body rids itself of the surplus of Jager bombs you stupidly ingested. Besides, I’ve realized that identifying with Ron so intimately is like our own personal way of keeping him and Parks and Rec alive even after its passing. Which is sort of sweet in a really disconcerting way. Sentimentality aside, here’s proof that you turn into Ron Swanson when you’re hungover:

When your boyfriend goes to turn on the light

When your friends try to lecture you about your drinking habits

Shut it, Becky. I drink alcohol just fi-- *Clutches head to stop it from exploding*

When you're at breakfast, trying to undo all the damage that has been done

When your dog is the only one sympathetic to your plight

When you still have responsibilities you have to attend to

When your significant other tries to get you in the mood

When you look at yourself in the mirror after vomiting

Basically, that point in the hangover when you just want to divorce yourself.

When your friends get excited over the prospect of a fun, mid-day activity

*Hisses from underneath blanket*

...And your mom comments on them

Whenever you get your hands on a source of water

When the 911 operator won't help you

This IS an emergency, M'am.

When it's 8 pm, you're still sick, and you're certain that you're dying