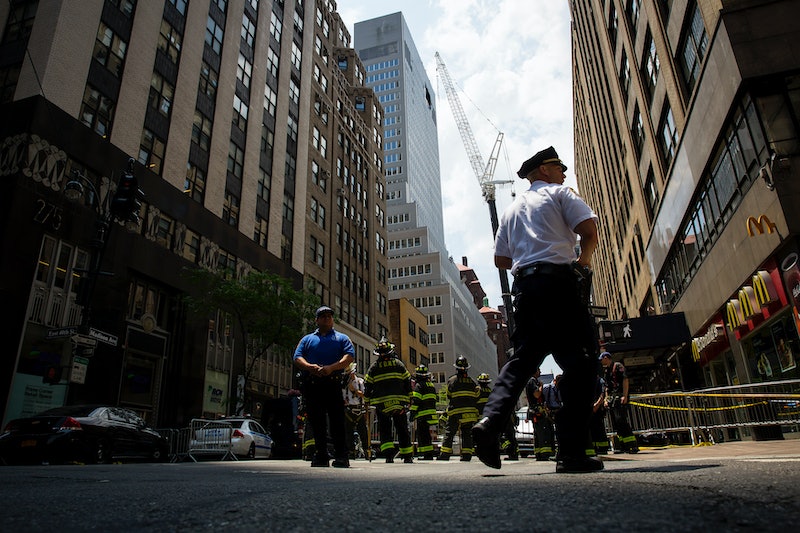 Seven people were injured on Sunday when a large crane lifting equipment to the roof of a Midtown Manhattan tower near 261 Madison Avenue sideswiped the building and dropped what Assistant Fire Chief Ronald Spadafora speculated was an air conditioning unit. Emergency response officials on the scene reported minor injuries to five motorists and two construction site workers, who were later taken to Bellevue Hospital Center for treatment, according to The New York Times. As of Sunday afternoon, the incident was still being investigated, and officials were unsure of the cause of the incident.

"Everyone went off of the scene awake and alert and oriented," said Spadafora in a statement to reporters. "Everybody is awake and stable."

After dropping the load of heavy equipment, which came loose and fell 30 stories before smashing into the ground, the crane smashed into the windows of neighboring buildings, showering passing vehicles with debris and glass. The main unit tumbled down onto the rear of one of the nearby vehicles, causing it to crash into a fire hydrant. The driver did not sustain any life threatening injuries, according to emergency response officials.

"Thank god this incident occurred at an hour ... when there were not too many people around," said Mayor Bill de Blasio in a statement to reporters on Sunday, thanking the men and women of both the NYPD and FDNY for their assistance and quick response.

As the afternoon progressed, social media users and news outlets on the scene began flooding Twitter and Instagram with their own shocking photos.

Witnesses told NBC News and NY1 reporters that the incident had sounded like train or a large car hitting a metal barrier.

"There was a loud noise, and usually there is metal plating on the ground in front of my building, so we assumed it was a large vehicle that had passed over [it]," said local resident Roxy Travers. "But after I walked by the window there was smoke ... so I was a little confused."

"A giant dust cloud came down, so we ran — we could feel it in our noses and our throats — but I'm a nurse, so I turned around and ran back," said another woman. She said she had spoken with the driver and passenger of the smashed car, who told her that they had just dropped their daughter off at school. "She (the wife), said she was bleeding a little, but okay."

"It was like a train car fell off the side of the building," added Meredith Kelly, who was visiting from Atlanta. "We heard a loud noise and saw [the equipment] dislodge. ... [It] hit one tier of the building and then we moved away for fear that other pieces of the building were going to hit us."

The region was closed off to local traffic and public transportation until investigators and emergency responders could analyze the situation.