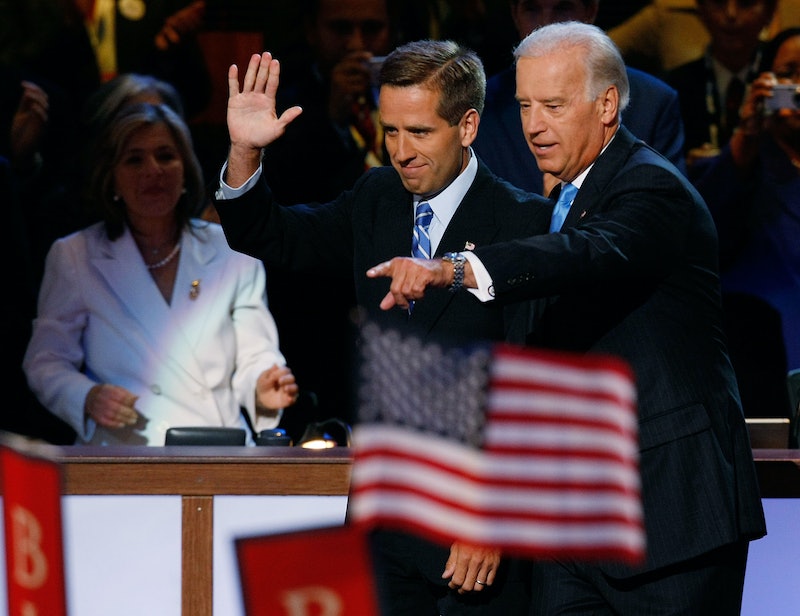 After the shock of the news that Joe Biden's son, Beau Biden, died Saturday from brain cancer at the age of 46, political leaders and people around the world have sought ways to express their grief and condolences to the vice president and his family. The Biden family released a statement Saturday to announce the sad news, saying "Beau’s spirit will live on in all of us." For those of you who want to pay your respect, here's how to send condolences to the Biden family.

For those who prefer to send their condolences via mail, address it care of Vice President Joe Biden and send it to the White House, 1600 Pennsylvania Ave. NW, Washington, D.C., 20500. Anyone who wants to offer condolences to the Biden family online, the White House has set up a page to submit personal messages, which will be delivered to the family. The "In Memory of Beau Biden" page has a tribute to the vice president's late son.

For all who knew him, who were inspired by his example, who share the passion for service that guided every day he lived, please offer your thoughts, prayers, and a message that will be shared with the Biden family as they grieve the loss and honor the memory of a most cherished man.

The Bidens have already endured more than their share of tragedy. Beau and his younger brother Hunter spent months in the hospital as young boys after a 1972 car accident took the lives of their mother Neilla and younger sister Naomi. Beau Biden, the former state attorney general of Delaware, had battled battling brain cancer for the past several years, an illness the family largely kept private. Even as recently as this month, when Biden gave the commencement speech at Yale, the vice president spoke of overcoming obstacles, without revealing what his son and his family were struggling with.

The New York Times reported that even in divided partisan Washington, D.C., members of both parties have reached out to the Biden family to offer their regrets and to praise Beau Biden as a man who was loved by many, regardless of political affiliation. His unforgettable speech to the Democratic National Convention in 2008 introducing the vice president as "My friend, my father, my hero" gives some insight into his compassion and his eloquence and shows why so many people will miss the younger Biden.

While the funeral arrangements for Beau Biden have not been announced, as a veteran of the Iraq War, he is entitled to a military funeral, according to the Associated Press. Beau is survived by his wife Hallie, and their children Natalie and Hunter.