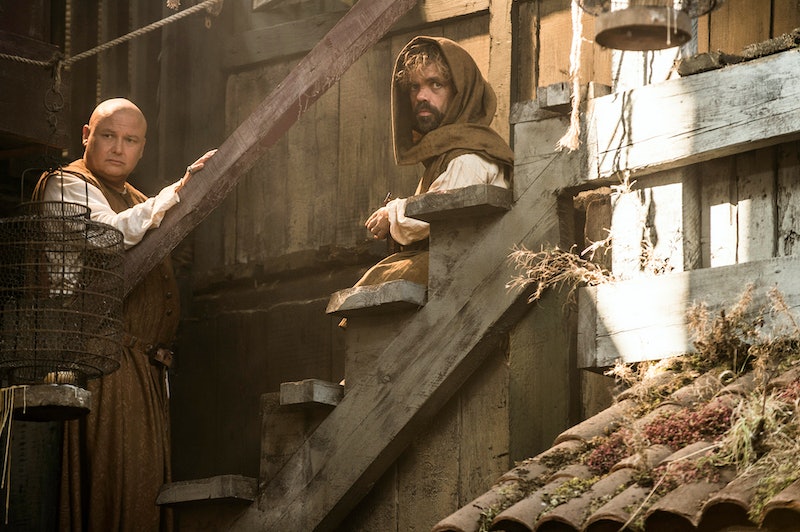 The meeting between Tyrion Lannister and Daenerys Targaryen on Game of Thrones has been one of the most satisfying things about Season 5. However, we've lost a pretty important character along the way. Whatever happened to Varys on Game of Thrones? The man who got Tyrion to Essos has gone mysteriously missing. The last time we saw the eunuch, he was in the brothel where Tyrion was kidnapped. Where'd he go? Does he know that Jorah took Tyrion? The two of them worked together in the past, as Daenerys reminded us this week. So, is Varys still looking for him? Did he continue on without him? And, why aren't there cell phones on Game of Thrones? That would make everything so much easier.

At this time in the books (spoiler alert), Varys helped Tyrion escape but remained in King's Landing. He then may or may not be involved in a subversive puppet show, and goes on quite the killing spree. Varys is responsible for the deaths of two major-ish players in King's Landing: Maester Pycelle and Kevan Lannister. (Both of whom are still alive on the show, so it was good for them that Varys accompanied Tyrion.) It's going to be interesting to see what the show is going to do with all of those characters in light of this change.

Until now, I've been wondering if, on the show, Varys decided to return to King's Landing and follow his book counterpart's plot when he lost Tyrion. However, the Varys we've come to know and love on the HBO series is far too devoted to the Targaryen cause to give up after having come this far.

On Sunday's episode of Game of Thrones, Tyrion mentioned Varys as the man who first told him about Dany's rise to power in Essos and the plan to rally behind her. Daenerys noted that she knew he was spying on her and using Jorah for information. Tyrion countered with a claim that he's actually her number one fanboy and the reason she survived for so many years. This makes me think that Varys is going to make it to Meereen soon. Whether or not he'll get to meet his heroine on screen, though, remains to be seen.