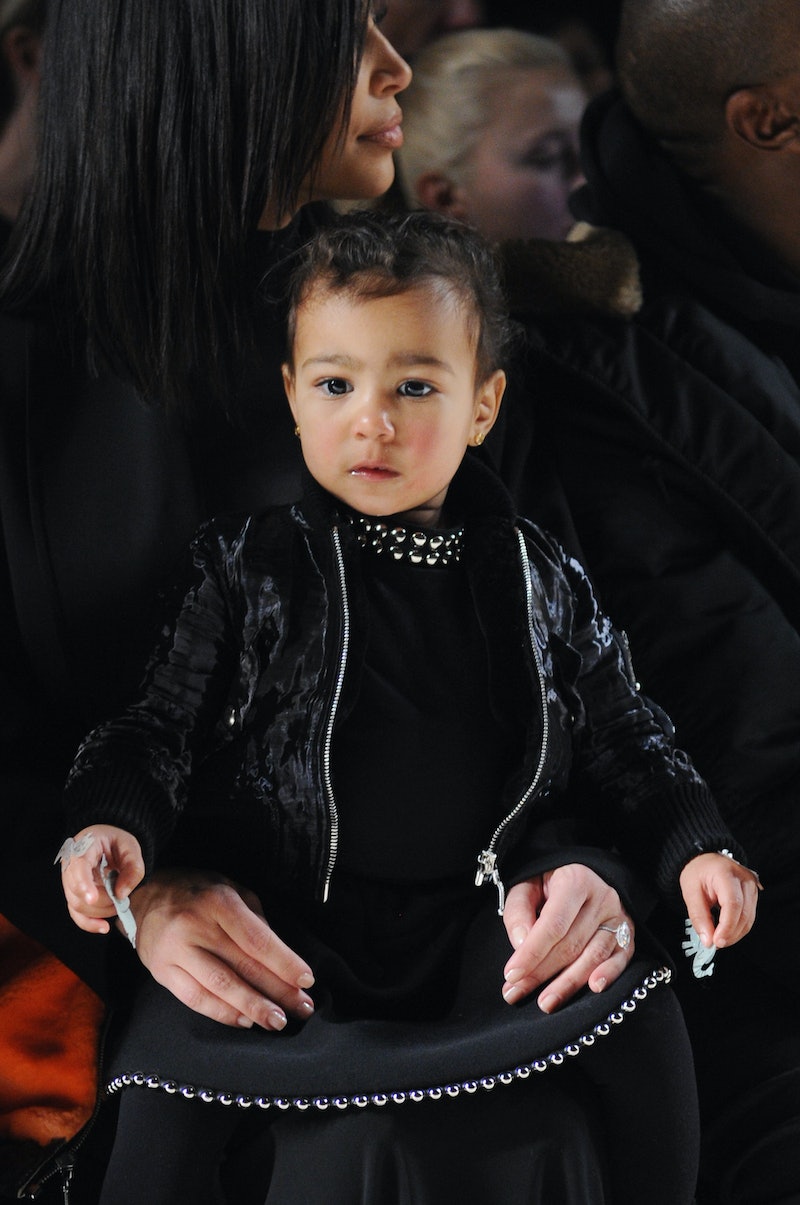 Guys, a new age has arrived: According to E! News, in a teaser leading up to the mid-season finale of Keeping Up With The Kardashians, Kim Kardashian confirmed she's pregnant with her second child with husband Kanye West. The reveal was a shocker, to say the least: Though Kardashian has publicly shared her struggle to conceive baby number two, the announcement seemed to come out of nowhere — and fans reacted to the news of Kimye baby number two with appropriate amounts of shock, awe, excitement, congratulations, and theorizing whether or not the baby will be named South West. (Which is to say, they broke the Internet.) However, amongst those who hasn't publicly reacted yet is Kimye baby number one, North West — which, y'know, makes sense since she probably can't operate a Twitter just yet, but STILL. I can't be the only one wondering what North West thinks of becoming a big sister while also looking through adorable pictures of North West with her cousin, Penelope Disick and aww-ing a lot, right? TELL ME I'M NOT THE ONLY ONE.

OK, now that we've all established that...

Though there's no way to really know how North feels about becoming big sister to a baby that's already broken the Internet, there sort of is a way to confirm that, no matter how she feels about it, she'll probably end up being the best big sister ever — and it all has to do with those North and Penelope pictures. Why? For starters, two are already extremely close in age (Penelope is two, while North is nearly two), and they're together so often that they might as well be sisters. Secondly, they always look so cute together, and North, in her own, fierce way, always looks pretty protective of Penelope, just like any big sister should be of their little sister. It's totally indication that North is going to be an amazing big sister! (Plus, any excuse to look at more photos of these adorable babies is worth it.)

North, Making Sure The Paparazzi Know Who's Boss So Penelope Doesn't Get Scared:

North, Glaring At The Paparazzi To Make Sure Penelope Knows She's Got This Handled:

North Holding Penelope's Hand Before They Cross The Street, Because Safety First:

North, Making Sure There Are No Ghosts Lurking Around On Halloween Before She And Penelope Go Trick-Or-Treating:

And Here They Are Just Being Generally Adorable, Because That's What Sisters Do:

Congrats to the happy family!

More like this
Selena Gomez Is Fine Being Single, But She Still Manifested Romance On 'SNL'
By Martha Sorren, Jake Viswanath and Jack Irvin
Why Sara Pascoe's Husband Is Familiar To Comedy Fans
By Alice Broster
Kendall Jenner & Devin Booker Reportedly Broke Up After 2 Years Of Dating
By Jordyn Tilchen
Paapa Essiedu Likes To Keep His Relationship Pretty Private
By Maxine Harrison
Get Even More From Bustle — Sign Up For The Newsletter