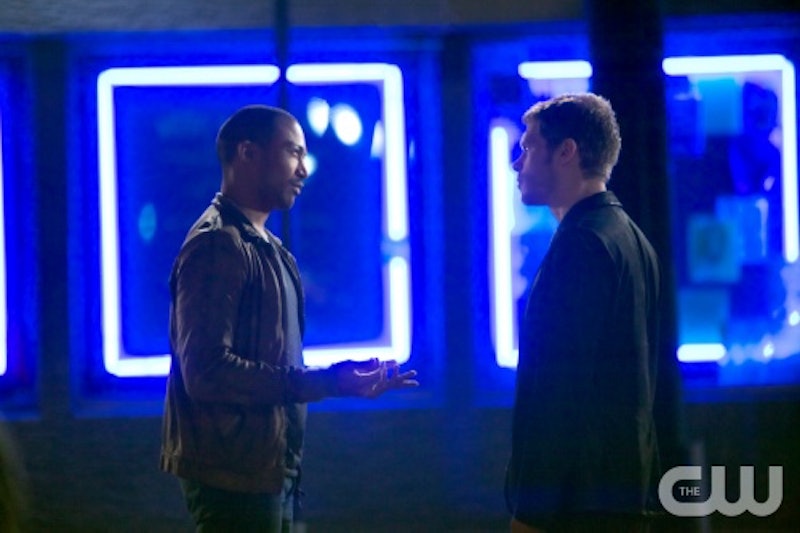 It might seem unfair to compare a spin-off and its parent series, but this just had to be done. And if the vampires of the CW have taught us anything, it's to be ruthless. Following the CW's announcement that it had requested a full-season order for The Vampire Diaries spin-off series, The Originals, we couldn't help but acknowledge how much better the new vampire-drama has become in a few short episodes than its lead-in.

Aside from pulling in great ratings for the network and being an overall ultimate guilty pleasure, The Originals has some seriously awesome bad guys on its roster which is really what it's all about.

The big baddies on this season of The Vampire Diaries are less like the sociopathic killers that once were and more like erratic escapees from Crazytown. Not really what we've come to expect and, as a fan of TVD from day one, not really holding my attention.

The Originals' edge is that it inherited the biggest and baddest of them all from its parent series, Klaus Mikaelson (Joseph Morgan). In case it wasn't enough to set up an entire show around a character that terrorized Mystic Falls and its inhabitants for two and a half seasons, their technical "main villain", Marcel Gerard (Charles Michael Davis), was trained and turned by the master of evil himself.

In the spirit of ruthlessness, we've assembled a power-ranking that proves that the current Originals bad guys are far superior to those bumbling around Mystic Falls.

Silas is a 2,000 year old warlock and world's first immortal being from ancient Greece. Oh, and surprise, he's the great-great-great-great times 1,000 grandfather of Stefan and Damon Salvatore (essentially the original Salvatore). Much like everyone else on TVD, Silas has gone completely cuckoo over his lost love, Amara. His behavior went from calculated and antagonistic to desperate really, really quickly and now he's just on a constant suicide mission because all he wants is to end his time on Earth. I feel bad ranking Silas so low, considering he was very successful at emotionally tormenting basically everyone when he returned from his long, sleepy imprisonment, but he doesn't even want to inflict pain on people anymore, he just wants his life to be over.

Damon was the original Vampire Diaries bad guy. I know you all forgot about how evil Damon was when he first arrived in Mystic Falls because Elena's basically de-fanged him, but he was, in fact, the show's original bad guy. He turned Vicky Donovan into a vampire and then he killed her. He compelled Caroline to essentially become his sex slave/personal food supply. He also killed his "Uncle" Zach for no reason. Basically, Damon was the original sociopathic, relentless bad guy in Mystic Falls (and it was sexy as hell) but now he ranks so close to the bottom of the power list because... love. (Ugh.)

Scorned by Silas thousands of years ago, her hatred has had plenty of time to fester and breed the erratic, emotional, and unpredictable behavior that she exhibits every week. Being an emotionally unstable psychopath has zero advantages when it comes to controlling your power and formulating productive plans. Qetsiyah is fixated on Silas, making her weak and giving her super-limited tunnel vision, so she underestimates everyone.

Marcel was rescued by Klaus as a boy, when he witnessed him being whipped on a plantation in New Orleans. Klaus saw a fight in Marcel that reminded him of himself, so he chose to take him under his wing and raise him before turning him into a vampire when he reached an appropriate age. When Klaus and the rest of the Mikaelson's moved on from New Orleans, Marcel stayed and built up a loyal army in their absence which brings us to the present day. Marcel is the ruthless lord of New Orleans' supernatural population and he's hellbent on getting Klaus out of his territory. He imprisoned his own right-hand man in a catacomb to starve to death because he disobeyed one of his rules. Marcel is technically the villain of The Originals and impressively enough, he's giving his sire a run for his money.

Klaus keeps a secret stash of magic daggers to use on his siblings when they piss him off. If that's not enough of a reason to mark him the single baddest villain on TVD and The Originals combined I don't know what could be. The number of throats the Vampire Diaries veteran has ripped out and humans/supernatural beings alike that he's brutally murdered are well into the hundred thousands at this point in his lengthy term on earth. He's got psychological and physical torture down pact and he understands the importance of well-placed leverage (Cami, Davina, his siblings, etc.). Also, hello, he's a vampire AND a werewolf at the same time so really, all he has to do is bite Marcel and he'll die a slow and painful death. He's the rightful top of the pyramid of bad guys.