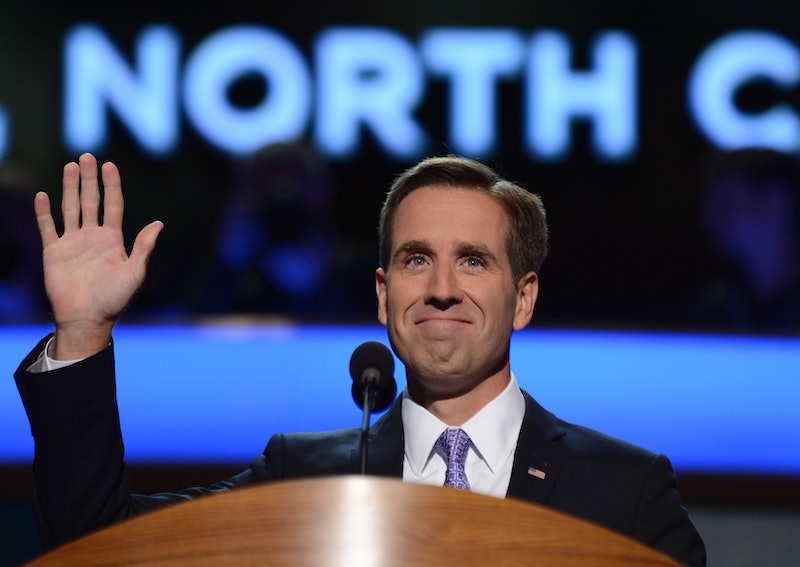 As Delaware and Washington grieves, the White House has established a Beau Biden memorial page on its website, allowing people to send memories, prayers and messages to the Biden family. The eldest son of Vice President Joe Biden and a former Delaware attorney general, Beau died Saturday night at the age of 46 from brain cancer.

"[Beau] battled brain cancer with the same integrity, courage and strength he demonstrated every day of his life," the vice president said Saturday in a statement confirming his son's untimely death. "Beau Biden was, quite simply, the finest man any of us have ever known."

It's believed to be the first time the White House has set up an online memorial guestbook. The memorial page, "In Memory of Beau Biden," the White House eulogized Beau as a "dedicated public servant" who, much like his father, approached life with vibrant enthusiasm and grace:

On Saturday, May 30, our country lost a dedicated public servant – a fighter for justice on the frontlines of war and in the courts here at home. A committed son, father, and husband, Beau Biden put his family first. His was a life we all strive to lead.

For all who knew him, who were inspired by his example, who share the passion for service that guided every day he lived, please offer your thoughts, prayers, and a message that will be shared with the Biden family as they grieve the loss and honor the memory of a most cherished man.

"Beau took after Joe. He studied the law, like his dad, even choosing the same law school," President Obama said in a separate statement. "Like his dad, Beau was a good, big-hearted, devoutly Catholic and deeply faithful man, who made a difference in the lives of all he touched – and he lives on in their hearts."

A number of politicians — Democrats and Republicans — released statements over the weekend in memory of Beau, a popular yet-down-to-earth politician who until recently was believed to be a possible candidate for the governor of Delaware. Presidential candidate Sen. Ted Cruz (R-Texas) said Sunday in a statement: "Heidi and I were saddened by the news of the loss of Beau, a dedicated husband and father, and a man that so many admired. He tirelessly worked to serve his country."

Another presidential candidate, Hillary Clinton, released this tweet, saying her "heart is broken" over Beau's death and Joe Biden's loss:

The White House is encouraging everyone — those who personally knew Beau and the Biden family and even those who didn't — to share messages with the vice president and his wife, Jill Biden, via the memorial page.