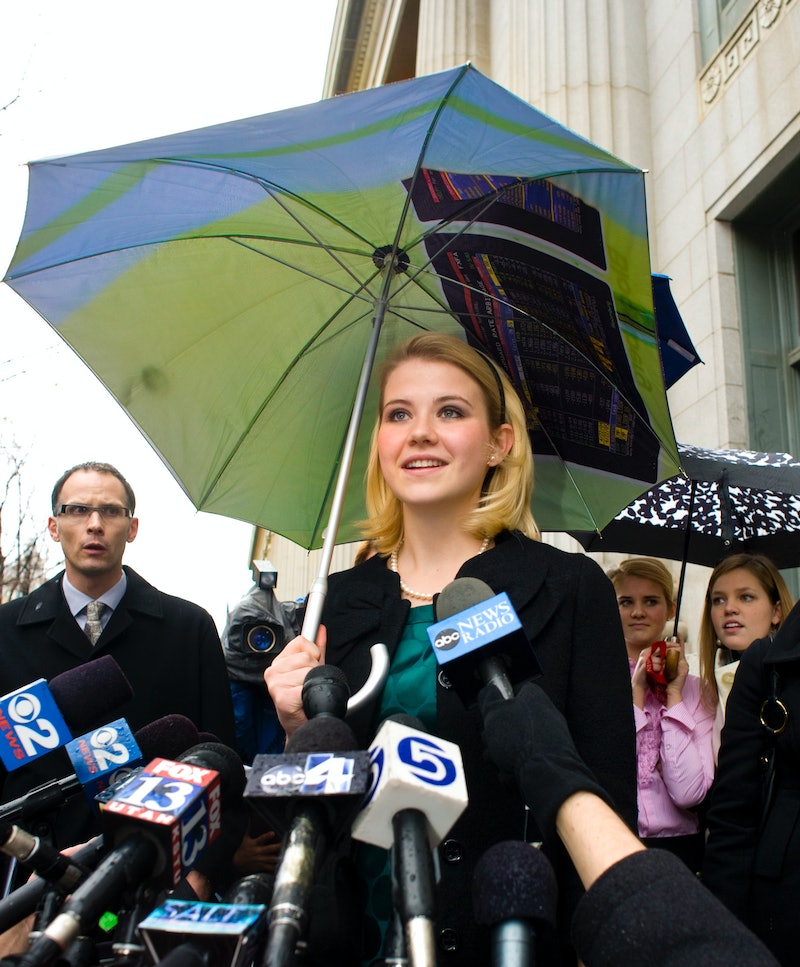 Turns out that kidnapping survivor and activist icon Elizabeth Smart quietly became a mother in February! Smart's father, Ed, announced on Saturday that his daughter had given birth to a healthy baby girl named Chloe. Ed added that did not speak to reporters earlier to respect his daughter's wish for privacy, telling The Salt Lake Tribune, "It is totally private. This is something she is keeping to herself and not trying to have out there." He added that the public not finding out about the baby for three months was "just what Elizabeth wanted."

Smart is one of the nation's most famous kidnapping victims. As a teenager in 2002, she was abducted from her bedroom. A street preacher named Brian David Mitchell viewed himself as a prophet and took her from her Salt Lake City home to be his second wife in a polygamous relationship. Smart was held for nine months, and has spoken out since about daily physical and sexual abuses. Mitchell was convicted to life in prison after pleading not guilty, and his wife took a plea bargain for a 15 year sentence.

After she was released, Smart became a speaker and advocate for the protection of children from abductions. She is the founder of the Elizabeth Smart Foundation, an organization that works to rescue children and educate them about how to protect themselves. Her autobiography and her speeches are filled with meaningful quotes. Here are 10 of Smart's best musings on life and her situation:

Life is a journey for us all. We all face trials. We all have ups and downs. All of us are human. But we are also the masters of our fate. We are the ones who decide how we are going to react to life.

Smart wrote this in My Story: Elizabeth Smart, an autobiography published in 2013. Her book serves as both a memoir and a sort of guidebook for devastating life events.

Smart ended with this quote after speaking to a group of Oklahoma girl scouts. Many of the advocate's speeches have an audience of young girls.

You will always have value, and nothing can change that.

Smart has said that all children need to be aware of this point. She also said:

Music is the unspoken language that can convey feelings more accurately than talking ever could.

This was another great quote from My Story. Smart has said that music played a huge part in her recovery. She plays the harp, which she says is the most relaxing instrument.

Later, there were times when I was angry with myself for succumbing to that fear. But those with shattered souls find it very difficult to speak.

Her writing gives a message about how to help victims of these sorts of crimes.

I also believe in faith. Faith in a loving and kind heavenly Father who will always care about me. Faith that my worth will never be diminished. Faith that God knows how I feel and that I can depend on him to help me through it all. I believe that God not only suffered for me, but that He will make everything up to me in His own time and His own way. That gives me the peace I need to feel like justice will win out in the end.

Smart is a devout Mormon. She often mentions religion in her speeches and My Story.

. . when we have passed our great test, we are then given opportunities to reach out to other people. We are able to effect change in a way that otherwise we wouldn't have been able to.

This quote from the memoir speaks to Smart's passion for advocacy. She often appears at events that call for the release of missing children.

Smart shows remarkable resilience in the way she is able to move past the turmoil that she faced as a 14-year-old. Her talks and novels contain many valuable lessons that she will surely pass on to her daughter.