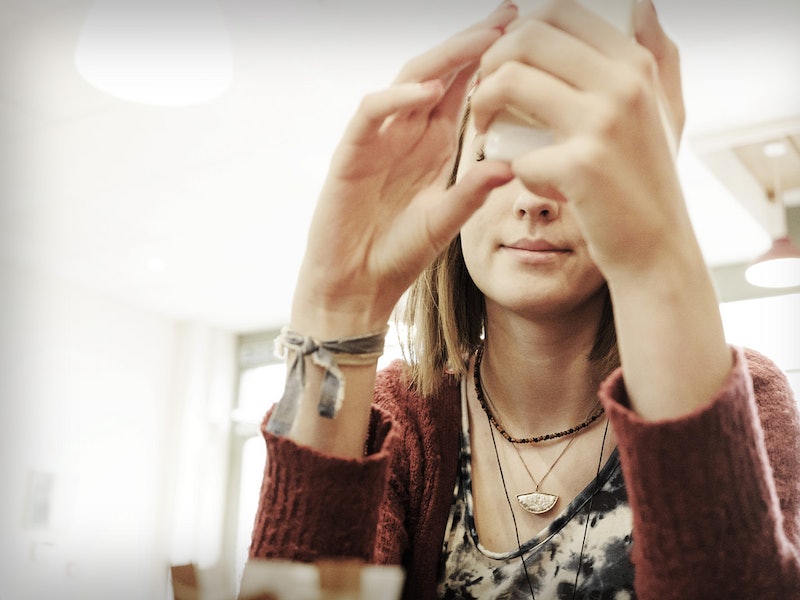 Have you ever swiped right on somebody on Tinder, only to realize after you engage in conversation with them that the person you matched with is literally the worst? A new study interested in figuring out this phenomenon is looking into why we swipe right on Tinder for people who aren't good matches. First impressions are important, but just because somebody's hot or they're holding a cute puppy doesn't necessarily make them a good person, or a good match for you. You would think puppy-holding would be a pretty good indication of character, but sadly, you just never know in this world we live in.

The study was conducted by researchers at Eastern Kentucky University, and while it didn't explicitly look at Tinder usage per se, it aimed to figure out what types of conclusions we draw about people's character traits based on their appearance... which is pretty much the principles on which Tinder operates. You look at somebody's pictures (and maybe, like, a three-sentence bio), and then making a snap-judgment to determine if you would be a good fit.

Researchers gathered 170 female college students, and tested how male facial attractiveness influenced how creeped out they would feel in certain scenarios, which researchers called "norm violation." (Don't worry, the scenarios were all hypothetical, and nobody was actually put into a sketchy situation.) For the study, the participants were given a picture of a man, either attractive or unattractive, and then given a hypothetical scenario that displayed either high or low norm violation. For example, the male subject asking the female to borrow a pen, versus asking her to pose for a picture for his modeling project. The first scenario is pretty normal, while the second one probably set off some alarm bells.

For one group, the researchers paired the attractive guy with the non-creepy request, and the unattractive guy with the creepy one. For the other group, they switched the photos and measured the participants' responses. On top of that, the women were asked to rate the personality characteristics of the hypothetical men in the photos, and this is where things get interesting. While it's no surprise that most of the women would have let either man borrow their pen (96 percent said they would have agreed to the request), and a vast majority were rightfully creeped out by the modeling proposal (93 percent of participants said "heck no" to both men), their reasoning was different, depending on the man's attractiveness. Women who denied the creepy request from the hot guy said it was because the guy's request was creepy; women who denied the not-so-cute guy for the same request blamed it on the guy being creepy. In other words, women may be more likely to give attractive men the benefit of the doubt.

That has a whole slew of not-so-comforting implications for real world interactions. But getting back to Tinder, it could show that since we make snap judgments based on attractiveness on Tinder, we're more likely to give that hot-but-maybe-douchey guy a chance just because he's hot, only to be disappointed later on when he turns out to be a huge sketchball.

The takeaway from all this? Trust your gut, in Tinder and in life, and if you think somebody is acting weird, it's best to stay away, even if he is a Ryan Gosling doppelganger. You never know — I mean, Ted Bundy was supposedly a good-looking dude. That might be an extremely paranoid way of looking at the world, but still, my point rests. Don't be afraid to: