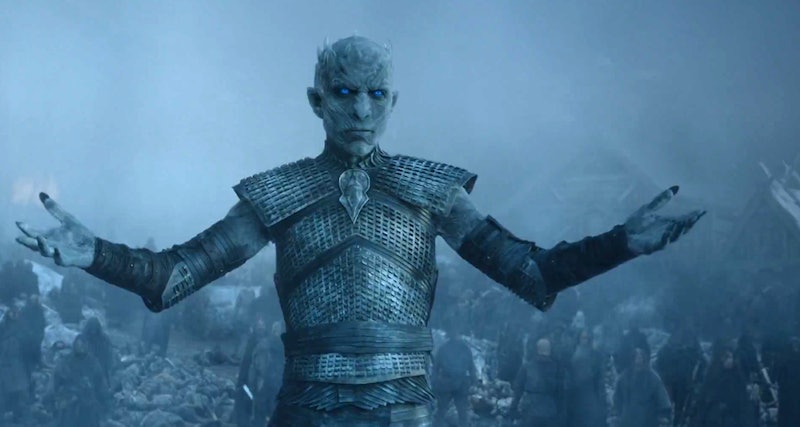 I didn't realize how much of a coward I was until Sunday night's episode of Game of Thrones "Hardhome." I guess they were saving these type of heart stopping episodes for the end of the season, and I was not prepared. As we all know Lord Commander Jon Snow made an unpopular decision to take our favorite ginger, Wildling Tormund, back to Hardhome. After a heinous battle and several moments of me screaming at my television, Jon, Turmond and the rest of the Night's Watchmen scramble and get into the last boat. But then, he appears; the leader of the White Walkers shows his face — you know, the man Game of Thrones fans have dubbed Coldemort.

The Night's King is terrifying, with icy blue eyes and some pretty regal armor. He walks to the shore to watch Jon and his men leave, and, as they drift out to sea, he slowly raises his hands to awaken all the the Wildlings who had been previously killed. They are now in the army of the undead because their bodies weren't burned. In this one move, the Night's King has effectively shown Jon, and the rest of us, that he isn't to be trifled with. If Valyrian steel and dragon glass are the only things that can kill the White Walkers, then perhaps we should all just give up now. It's safe to say that winter has come and we all better recognize.

Coldemort is play on our favorite nemesis from Harry Potter, and Voldemort was terrifying enough, but this new guy might make He-Who-Must-Not-Be-Named look like a kitten. It doesn't look like Coldemort has mastered the art of speaking (I mean he really doesn't need to); however, if he could talk, here are seven Voldemort-inspired quotes that he could use when addressing Jon Snow.

Everybody North of the Wall thought they were safe from the White Walkers. The Night's Watch had been protecting them, and the White Walkers were only whispered about. Obviously, Coldemort and his army were simply taking a reprieve. How things have changed.

2. "I’m going to destroy you. After tonight, no one will ever again question my power. After tonight if they speak of you, they’ll only speak of how you begged for death. And how I being a merciful Lord… obliged."

Um yeah... Coldemort looked like he was smirking at Jon when he watched him paddle away on his sad boat.

3. "You’re a fool, Jon Snow, and you will lose everything"

Jon's brothers in the Night's Watch tried to warn him about going south of the wall, but he just had to be the hero.

4. "There is no good and evil. There is only power, and those too weak to seek it."

I think everyone is the Seven Kingdoms should just give up their fight for the Iron Throne. They should just put a bow on it, and give it to Coldemort. King Tommen is nowhere to be found, so he isn't using it anyway.

5. "Don’t you turn your back on me, Jon Snow! I want you to look at me when I kill you! I want to see the light leave your eyes!"

Don't get too upset, but wouldn't it be cool if Jon turned into a White Walker? I mean he would be AMAZING at being evil.

6. "I can make things move without touching them."

Clearly! All Coldemort had to do was lift his arms, and suddenly his army had doubled in size.

We know very little about The Night's King or even The White Walkers. It'll be interesting to discover what's really going on with them, but this Voldemort line clearly embodies what I think is going on here. Good luck, Jon Snow. You'll need it.