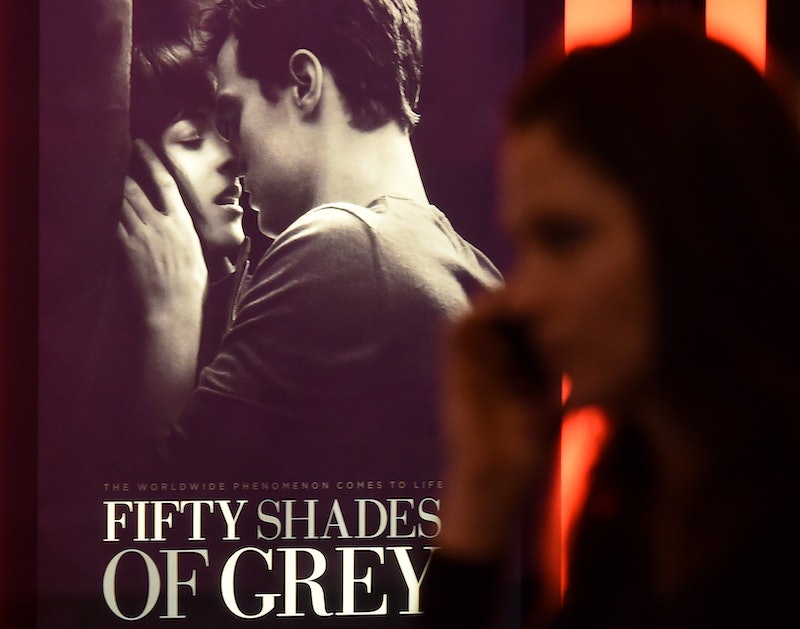 The new book will be called simply Grey and is scheduled to be released on June 18, which is Christian's birthday in the books. It will retell Fifty Shades of Grey, the first book in the Fifty Shades trilogy, from Christian's perspective, and will be available in both e-book and paperback from Vintage Books. There is no word whether the other three books will be getting a similar treatment.

"Christian is a complex character," James said in a press release mailed to Bustle on Monday morning, "and readers have always been fascinated by his desires and motivations, and his troubled past. Also, as anyone who has ever been in a relationship knows, there are two sides to every story."

Of course, choosing to retell Fifty Shades of Grey from Christian's perspective is also a complicated thing. Since Fifty Shades was first published four years ago, James' series has faced heavy criticism for the many unhealthy aspects of its central relationship and the consistent abusive behavior exhibited by Christian Grey.

The disturbing thing about the book, though, is that none of this is presented as abusive. Instead, Christian and his abusive behavior is glorified as manly. Some of his abusive tendencies are portrayed as negative and the product of his own abusive childhood, but by the end of the series, when Christian has supposedly worked through his old traumas and is free of all his past demons, he still exhibits the same controlling tendencies over Ana, and shows no sign of having truly changed in regards to how he treats her.

So, rewriting the series from Christian's perspective is a tricky thing, especially since the basic facts of Christian's actions would presumably have to remain the same. It's hard to get around the fact that much Christian's behavior reads like a domestic violence checklist. However, E.L. James could potentially use this as an opportunity to shine a different light on Christian, making it clear that such behavior isn't desirable or romantic, but the product of a deeply troubled man who has never properly dealt with his own trauma and is in turn abusing someone else.

E.L. James has before demonstrated a lack of interest in engaging respectfully with those who try to tell her about the abusive aspects of Christian and Ana's relationship, so it's up to her to not continue to glorify Grey.

We live in a culture in which violence against women is horrifically common, and yet widely misunderstood. Common stereotypes about domestic violence — that it's only physical, that abusers are obvious and unambiguous monsters, that women can just leave — can not only make it more difficult for victims to get assistance from friends and family, but can make it more difficult to recognize that they themselves are in an abusive relationship, especially during the early stages when it is still easier to get out.

So, what will Fifty Shades of Grey look like from Christian Grey's perspective? Well, I guess we'll just have to wait until June 18th to find out.