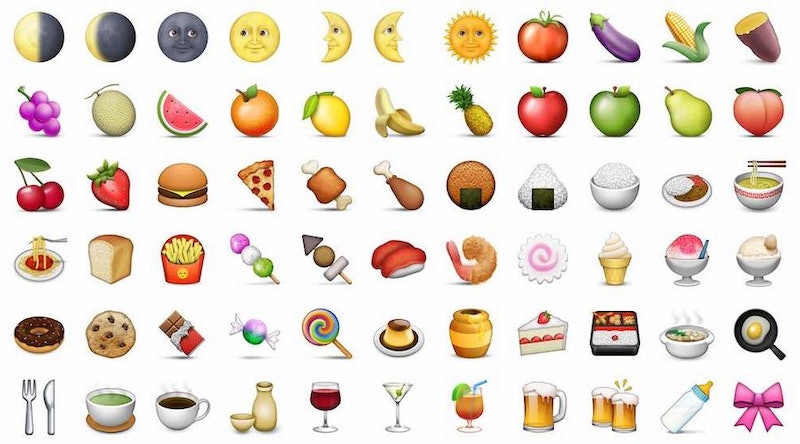 People have already rhapsodized enough about the beautiful wonders that are food delivery apps. No human contact! No using our voice boxes! Millions of options with just a few clicks and swipes! But for those of you who feel there are still too many clicks, swipes, and options , there is a new app: Fooji, which lets you order takeout via emoji. Yes, that is a real thing that actually exists.

Foojii is exactly what it sounds like — a combination of food and emojis — and the premise is fairly simple: Users create an account linked to their Twitter; then they tweet a food emoji to @gofooji. Like, that's literally it. Fooji will then locate a restaurant in the area with at least one menu item that matches that emoji, and voila! Emoji-fueld delivery. For $15, you get a meal that you didn't even have to choose delivered right to your door. Honestly, my cat and/or a three year old could probably use Fooji successfully. What a time to be alive.

The app, which is still in beta testing and will officially launch in New York this month, was created by WeStyle employees Gregg Morton and Erik Zamudio after they spent an hour trying to figure out what to order for lunch. They'll pair up a restaurant and an emoji each week to keep up the element of surprise. Their key demographic: The adventurous foodie.

Luckily for all of you who either can't stand to make decisions or love to gamble, Fooji is currently asking for testers to try out their before the official launch; head on over to the Fooji website to find out more.

But what I really want to know is this: do they really mean any food emoji? Like, what about any of the following five emojis? What will they yield?

Technically it's food... for some humans... very tiny ones...

I hope it's delivered by people in bear costumes. Or just trained bears. Or just lWinnie the Pooh.

No, but actually, "Pot of Food" is the official title of this according to Emojipedia. It's the ultimate wildcard. Also whatever is in that bowl looks super fleshy and suspicious.

There's probably too many options for this one... but if they just bring a loaf of bread from the local bodega, I'd be none too pleased.