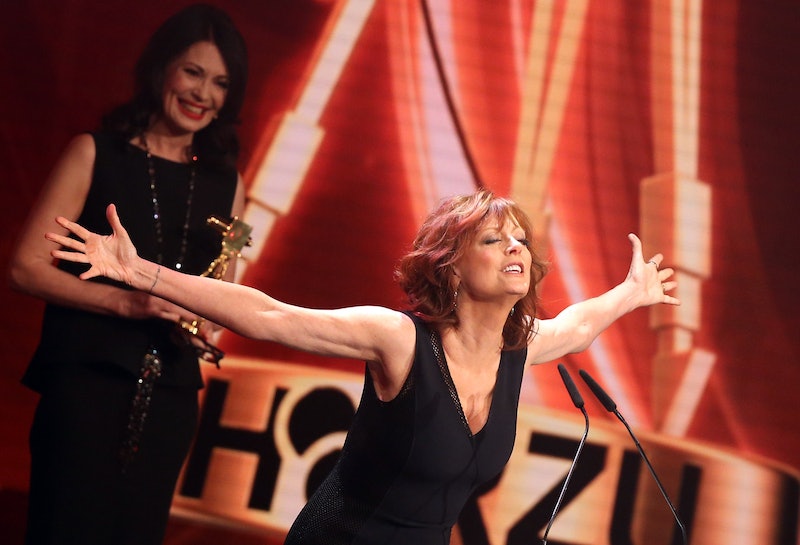 Susan Sarandon is a timeless woman, not only because she's beautiful and sharp, but because she's "open-minded as hell" as Parks and Rec's Jon-Ralphio might croon in acapella. In an interview on The View, Sarandon, while holding a swaddled dog for some reason, started rapping about what's she looking for in a relationship, and she said that while she isn't actively looking to be Tinder-matched right now ("I'm not swiping left or right," she said), she does have a bucket list of what her perfect mate would be. But none of those characteristics are limited to "age, color, or gender," to which Sarandon is open.

That's right, gentlemen AND ladies, Sarandon is single and ready to mingle, but only if you are up to her high standards. Whoopi Goldberg tried to casually flirt with Sarandon, who wasn't really having it, because dang it, Janet, she deserves the very best. And as great as it is to hear verbatim from the goddess' mouth that she's open to women, it's not surprising, considering the 68-year old Sarandon's track record with progressive activism.

But would you expect anything less from a woman who stripped down to her skivvies for some gender-fluid lovin' in Rocky Horror Picture Show all the way back in 1975? Sarandon has been an avid activist for as long as she's been an amazing actress, committing her name, time, and passion to as many causes as she has hit movies. Sorry to draw so many cheesy parallels between the two, but I just really love this woman. She got death threats for being so staunchly against the Iraq war, leading protests publicly, even though she brushed it off pretty cool: "I don't think I ever thought someone would really kill me," she said. Cool, calm, collected. Very nice.

She's especially outspoken about her support as an ally to the LGBTQ community. Most recently, she posted support on her Facebook page for her nephew Scott Lyon, who wrote a plea to one of his teachers to stop posting anti-gay messages on her own personal Facebook page:

So proud of my nephew Scott and the dialogue he started. He was responding to a teacher he had at his high school who still believes that homosexuality is a learned behavior. High school is a tough time anyway ... students don't need teachers making it even more difficult.

It's always been in her arsenal of causes. In 2014, Sarandon starred in a video for the "Love Is Love Is Love" campaign for the Human Rights Campaign. In a great little video, she voiced her support for "equal and unequivocal" right to marry, even though, as she said, marriage isn't personally her thing. What a cheeky little supportive minx.

We love to love Susan Sarandon, and we are already preemptively jealous of whatever lucky lady (or man, I guess), gets to be the Thelma to Susan's Louise.