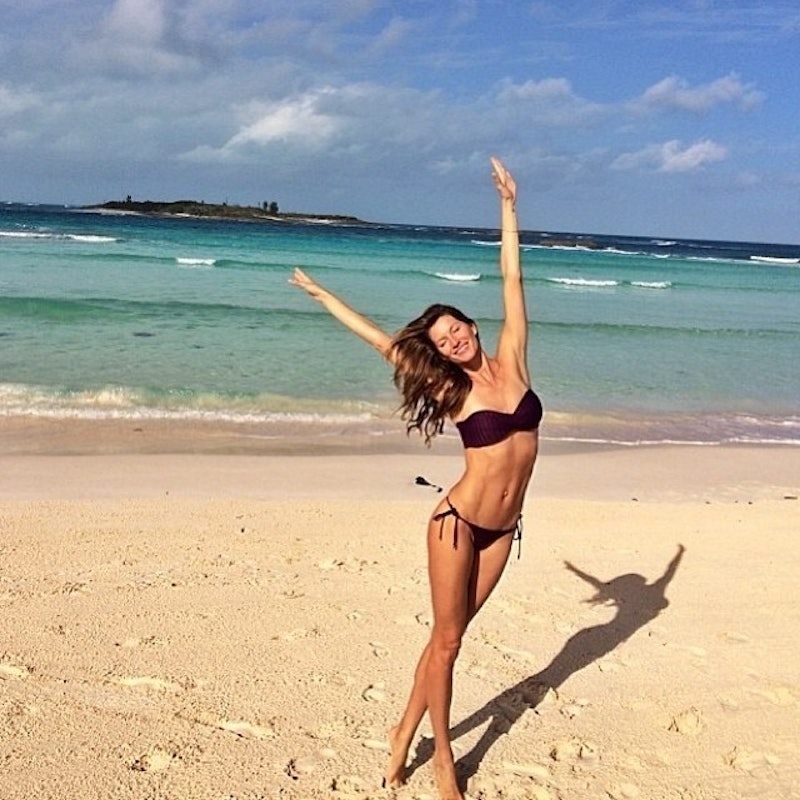 If you want to see Gisele naked, all you'll need is the latest copy of Vogue Paris. Inside the hallowed pages of that publication, you'll find two Giseles — one clothed, one wearing only sneakers and tube socks — duking it out for their lives, or at least for page-views.

It's Vogue, so it's as classy as a nude photo-shoot can get, and it's Gisele, so the photos are striking. You can't ignore the defined musculature of her body as she stretches, arches, and crouches — it's art-level stuff.

But... it's Gisele. She may be a model, according to her paycheck, but it's pretty obvious that she's also a major celebrity. She's a household name, she's tabloid fodder, she has a famous and publicly scrutinized marriage, etc. Because she long ago crossed that invisible line that divides "famous" from "luminous supergiant level famous," the shoot in Vogue Paris isn't a "nude photo-shoot with Gisele," it's a "nude photo-shoot of Gisele." There's an important difference.

Why are nude photographs acceptable public consumption for high-end society, when pornography isn't? The difference is in the intention, which shapes the execution. The nude — especially the female nude — has been an obsession of artists for centuries; it's a naturally beautiful form that appeals, biologically and aesthetically, to the human eye. It's also just great art material.

You've seen Leonardo da Vinci's "Study of Hands" or Michelangelo's many muscular nudes — the human body provides endless exploration and fascination for an artist. It's just as worthy a subject for the camera or paintbrush as a beautiful landscape (and people tend to find it a lot more interesting, for some reason, wink wink). Naturally, art that features nudes can (and often does) have a sexual element, but there's usually artistic intention at its core — an intention to display the body as an object of beauty, fascination, and study. Nudes that fall under the sleazier heading of pornography tend to have cruder intentions behind them — exploitation, profit, display, shock value.

There's an obvious artistic intention behind the photo-shoot with Gisele. It's gorgeously done. But the intention is a little bit invalidated once the magazine goes to print — or once the photos start hitting Instagram — simply because Gisele is so famous.

It's naive to pretend that there's not a different sort of intrigue that comes attached to a famous name. "Anonymous female nude" doesn't carry the same thrill that "Julia Roberts topless" does. (Have fun with that one, search engines.) In the former, you're an observer; in the latter, you're a voyeur, because you're jonesing for a more intimate look into the familiar — trying to get closer, so to speak, to something you've already seen before.

Models have long been exactly what their name says they are: human clothes-hangers when clothed, objets d'art when nude. They're supposed to look idealized — and believe me, Gisele looks idealized. When photographed, they're designed for art, not voyeurism. But it's different with celebrities, whose relationship with the public is a much more intimate one: We may not know the name of the girl in the corner of the Dolce & Gabbana ad, but we know Scarlett Johansson's cup size. "Nude photoshoot with Gisele in Vogue Paris" can never be simply a artistic exploration of the female body; she's too big a name for that. That's a search term now. It inspires voyeurism. We're not as interested in seeing how Inez and Vinoodh shoot the nudes — we want to see how Gisele's ass looks at 33.

Sure, the photo-shoot has plenty of signifiers of artistic credence. It's in Vogue Paris, for goodness sake. But to a tabloid-reading audience, it scratches the same itch that celebrities' nude selfies do. We want to see how they're aging, see if they really do look that perfect underneath. It's not the photography we want to see, it's their real selves. And maybe that's a new form of art. But maybe it's just creepy.