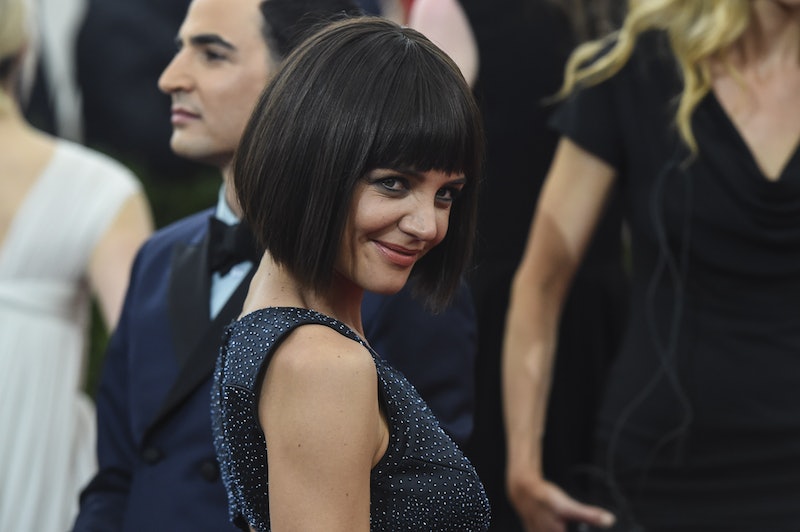 Major celebrity haircuts can be shocking sometimes. You associate a star with one look and then BOOM—they go change everything. So when Katie Holmes debuted a new, blunt bob at the Met Gala, it was kind of a big deal as far as celebrity hairstyles go. She even prefaced the whole thing with a dramatic "watch my hairstylist chop off all my locks as I do a handstand" post on Instagram. As one does. It was a dramatic change to say the least. I mean, sure, it kind of looks like the same haircut that her daughter Suri had for many years of toddler-hood, but that's beside the point. It was the Met Gala. It was a moment. It was bold and brave. You go, Katie Holmes, we all said in unison. But here's the thing: Katie Holmes' bob was a lie.

As Holmes has been merrily posting on Instagram leading up to the CFDA awards, it all became clear: It was a wig. Of course it was a wig. I mean, did we even really look at it the first time? The thing envelops her entire head, like it has a life of its own. I mean, the more I stare at it now, the more I'm picturing it leaping off her head and taking flight. It just doesn't look right. Maybe we were all in denial, right? Maybe we just didn't want to see what was right in front of us all along.

If taking a second look at the Met Gala red carpet photos still doesn't convince you that it was a fake, let's review Holmes' more recent posts on Instagram leading up to tonight's CFDA awards, shall we?

It's safe to say that the bob was, in fact, all a lie. That is, unless those are extensions....I mean, it's possible, right? It's possible that Holmes is just spending her free time tricking the general public about the real/fake state of her hair? And furthermore, is there anything in the entire universe we can even be sure of after this? These are the questions that keep me up at night.

But, just for the record, I still think it was a wig.