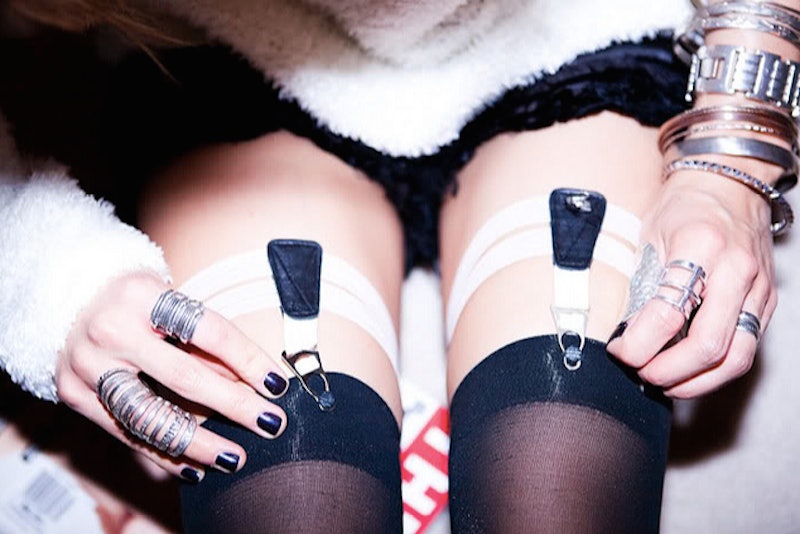 Women don't already have enough pressure to have a certain type of body. I mean, it's not too much to ask that we look perpetually twenty-two, have big breasts, a tiny waist, huge ass, flat stomach, skinny legs and a gap between our thighs. That's a totally natural, normal looking woman's body and it's ridiculous that any woman would think any differently. I know what you're thinking: "That's not my body type!" Well, let me call the wahmbulance for you, you lazy Wendy McWhiner, because you are the exception, not the rule. Pretty much all women look exactly the way I just described. They must, otherwise why would that be the standard by which all women's bodies are measured? It would be f*cking absurd to establish a set of physical ideals that don't represent the most common reality, right? Wouldn't that just result in a bunch of women hating themselves, feeling like failures, and hurting their bodies in ceaseless attempts to make them look a way they were never intended to look? WHAT KIND OF WORLD WOULD THAT BE?

Buzzfeed has furthered this salient point by providing us with this amazing video of men saying what they think of thigh gaps, because obviously the ultimate arbiters of what the ideal woman's body looks like is man. Man is benevolent and smart and the reason we live in this vast, advanced society, so we should all listen to what he thinks women should look like, because he is always right about anything to do with the female body especially.

As a woman who is constantly wondering what men think of my body, is the video I've been waiting for. I mean, all I've really been wondering this past year is exactly what men think of thigh gaps. And here it is, finally. None of the men in the video can understand why a woman would want a thigh gap. And I mean, if a man can't understand why a certain bodily attribute might be desirable to a woman's body, then I guess women are all just silly little chickens for ever having considered it in the first place! Aren't we just such a bunch of adorable little dumb-dumbs? Also, none of the men interviewed have dated women with thigh gaps, because ew, thigh gaps are not "normal" and of course men only want to date women whose bodies seem normal to them. Sorry to all the women who have male-judged abnormal bodies, I guess you'll all just have to go to the island of thigh gapped reject women and become lesbians with each other.

If you want to know what guys find attractive about a woman, it's your SMILE! Ladies. OMG! I bet you all walk down the street everyday frowning! But now you know! All this time, all you've had to do is SMILE to get the attention of men! Just turn that frown upside down and maybe you'll get a boyfriend or even MARRIED! Who knew! So the moral of the story is: DON'T have a thigh gap because men say they're not looking for that in a woman but also never frown because you don't know who might be falling in love with your smile! LOL!

Thanks guys, for mansplaining the female body in a way that we can really understand! I think it's high time men started reclaiming things that are theirs, like women's bodies.

Seriously though, left to their own devices, women might go out and ruin it for everyone. I mean, on their own, women decided thigh gaps were hot. Who knows what they might come up with next? Maybe we'll all get Hillary Clinton haircuts. Or worse, FLAT ASSES. Men really need to intervene here if they want to keep things to their liking.

More like this
Most Comfortable Underwear For Big Butts
By Audrey Williams
42 Black Owned Fashion & Beauty Brands To Support Today & Always
By Mekita Rivas, Shea Simmons, Kui Mwai and Dominique Norman
Jennifer Aniston Just Brought Back A Major ‘00s Bikini Trend
By Darshita Goyal
Myra Magdalen Is TikTok’s Queen Of Chaotic Maximalist Fashion
By Sophia Moore
Get Even More From Bustle — Sign Up For The Newsletter